BYU Expels Ex-Mormons Who Still Attend the School, but This Group is Looking to Change That November 20, 2014 Hemant Mehta

BYU Expels Ex-Mormons Who Still Attend the School, but This Group is Looking to Change That

It makes sense that, if you attend a private religious school and lose your faith along the way, you shouldn’t go there anymore. It’s never that simple, though. What if your parents are paying your tuition because you go to that school? What if you’re in too deep with your major and transferring schools would mean starting from scratch? What if you still agree to follow the honor code and other rules? Should you be allowed to stay there?

The solution for most students would probably be, “I’ll keep my mouth shut and just play the Faith Game.” But a group called FreeBYU is asking administrators at Brigham Young University to refrain from expelling students who leave Mormonism while studying there:

Brad Levin, who is among three BYU graduates directing the effort, has seen Mormon students who suffered a “faith crisis” lose not only their standing in the Provo school, but also their university housing and campus jobs.

FreeBYU proposes that if students resign from the LDS Church, they be allowed to obtain an “ecclesiastical endorsement” from the BYU chaplain or their new religious leader and pay the non-LDS tuition to remain in school.

So, Levin argues, if Mormon students who join another church or become agnostic, yet agree to live by the honor code’s other standards (no drinking, smoking, coffee, tea or premarital sex) and are willing to pay the higher non-LDS tuition, they should be able to “continue their academic progress, retain their university employment and remain in BYU contract housing.“

What’s really great to see are current Mormons supporting FreeBYU. You can read their profiles here.

BYU spokeswoman Carri Jenkins acknowledged that Mormons who change faiths are treated differently than those who enter as non-LDS.

Jenkins seems to be ignoring the alternative: It’s not like those students will remain faithful Mormons if they’re threatened with expulsion. Rather, they’ll just become lying ex-Mormons, not telling people what they really think. In other words, the school’s inflexible honor code is forcing these students — who, to be clear, did nothing wrong — to lie for the sake of finishing their education.

BYU has every right to say to students, “If you’re not a Mormon, you can’t be here.” The problem here isn’t a legal one. It’s a moral one (and maybe even a strategic one): Do they want students to be honest? With the current policy, that’s not happening. And it sure as hell isn’t giving those students any reason to reconsider Mormonism.

November 20, 2014
Congressional Hearing on "Religious Accommodations" in the Military Gets Contentious
Next Post 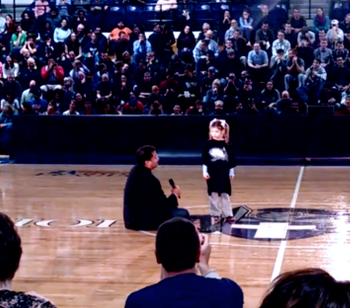 November 20, 2014 Neil deGrasse Tyson's Perfect Response to a First Grader Who Wants to Know How She Can Help the Earth
Browse Our Archives
What Are Your Thoughts?leave a comment