Pastor’s Son Donnie Swaggart Says Gay-Rights Activists Are Just Like ISIS, But (For Now) Without the Head-Chopping November 19, 2014 Terry Firma

Pastor’s Son Donnie Swaggart Says Gay-Rights Activists Are Just Like ISIS, But (For Now) Without the Head-Chopping

Last month, the city of Houston embarked on a bit of a fishing expedition when it subpoenaed, from five conservative pastors, their sermons and other communications about a controversial local equal-rights ordinance. The city’s request, overbroad and seemingly hostile to First Amendment protections, got a lot of criticism (some fair, some not), so the Houston legal beagles backed off, the subpoenas were rescinded, and the whole thing soon looked like a (bygone) tempest in a teapot. Hemant wrote about the case here and here.

Though its bones have been picked over one too many times already, the affair was like a mini-Benghazi for the Religious Right, a chance to sink its teeth into a juicy anti-left narrative with lots of potential for demagoguery… and not a whole lot of substance.

And so it is that, five weeks after the fact, we find Donnie Swaggart, the son of the thoroughly disgraced televangelist Jimmy Swaggart, on a panel of Christian talking heads, alleging that the Houston affair portends a “war on God.”

“All of this is to shut the Bible up. They want the Bible gone. And I’m going to make a statement: These people that are trying to do this in Houston, the only difference between them and ISIS, those thugs in Iraq, is those here cannot chop our heads off. That’s the only difference. The heart is the same. If they could silence us that way to intimidate others, that’s exactly what they would do.“ 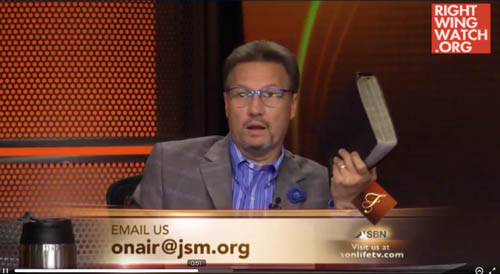 November 19, 2014
A Nativity Scene at the Michigan State Capitol Could Open the Floodgates to Everyone Who Wants to Put Up a Display
Next Post