Holy Hymen: If You Want To Be a Police Woman in Indonesia, Be Prepared For the Two-Finger Virginity Test November 19, 2014 Terry Firma

Holy Hymen: If You Want To Be a Police Woman in Indonesia, Be Prepared For the Two-Finger Virginity Test

A two-finger virginity test for female cops? It’s just as ridiculous, degrading, and unnecessary as it sounds, but in Indonesia, it’s a reality.

The “virginity tests” are conducted under Chief Police Regulation No. 5/2009 on Health Inspection (Pemeriksaan Kesehatan) Guidelines for Police Candidates. Article 36 of the regulation requires female police academy applicants to undergo an “obstetrics and gynecology” examination. While the regulation does not specify that a “virginity test” is to be administered as part of the exam, two senior policewomen told Human Rights Watch that it has long been the practice. …

Applicants who “failed” were not necessarily expelled from the force, but all of the women described the test as painful and traumatic.

If recruits who aren’t sufficiently virginal aren’t even dismissed (not that I’d want them to be), what is the point of having the test in the first place? I’d normally venture that it’s just a scheme by a bunch of pervy men looking for a socially acceptable way to grope women, but the exams appear to be administered by female medical personnel. 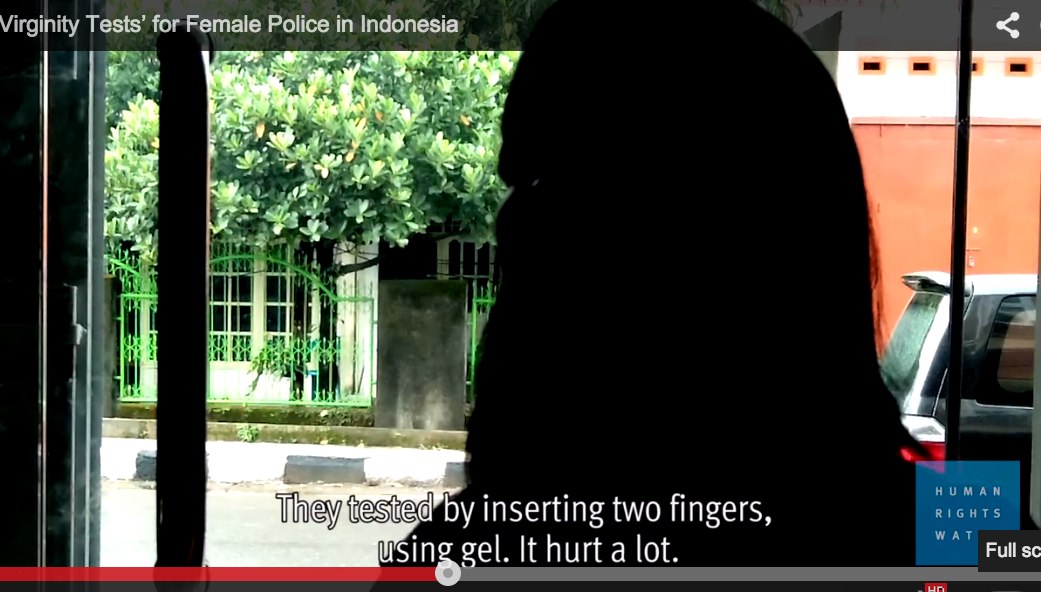 Some police sources claim that the virginity tests were abolished years ago. However, Human Rights Watch investigators had no trouble finding plenty of policewomen who had undergone the preposterous procedure, including two who were tested in 2014.

Why virginity is a requirement for police work, no one seems to know. My best guess is that it’s a medieval proxy for a woman’s purity of character.

In case you were wondering how married women respond to the exam, the answer is they don’t: they’re not eligible for the job.

Indonesia isn’t the only nation where these loathsome methods are in use.

Human Rights Watch has documented the use of abusive “virginity tests” by police in several other countries including Egypt, India, and Afghanistan.

Occasionally, calls go up in Indonesia to finger-test schoolgirls in the same manner.

November 19, 2014
Today, on Capitol Hill, There Will Be a Hearing on "Religious Accommodations" in the Military
Next Post