I don’t understand this guy.

Two years ago, Ernest Perce V (below, the Pennsylvania State Director of American Atheists at the time) was one of the people trying to convince the Greencastle-Antrim School District board members to drop the Lord’s Prayer, a 50-year-old tradition.

And it worked! The board members realized they weren’t going to win this battle, so they stopped fighting it. 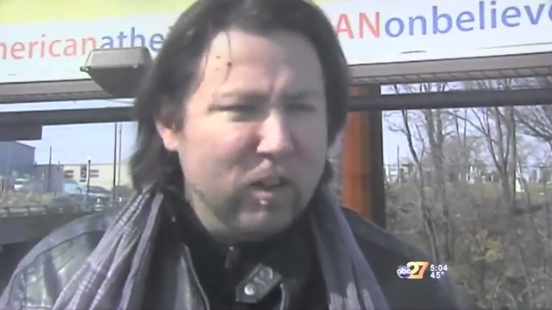 Last month, though, Perce appeared in front of the school board again… but for a very different reason. He apologized for his actions:

Wearing a white clergy collar against a black shirt, he said he was now a traveling preacher.

“Every day I kick myself at what I did,” Perce told the board members and public in attendance. “Forgive me.”

Keep in mind that this was someone who once made actually-Islamophobic comments online, who threatened to publicly desecrate the Koran if Pennsylvania state officials didn’t drop their “Year of Religious Diversity” Resolution, and who dressed up like Zombie Muhammad during a local Halloween parade.

This guy was now a Christian.

Turns out that was the least of his delusions:

He also became convinced, after reading a book by President Dwight D. Eisenhower, that Jesus was not a Jew, the Jewish holocaust never occurred, and 9/11 was caused by “the false state of Israel.” He now leads Jesus Was Not a Jew Ministries, with 40 followers. He and his wife intend to pull their boys, Praise, 12, and Apple, 5, out of public school, to be homeschooled while traveling with them on the preaching circuit.

He somehow became a Holocaust denier and 9/11 Truther, too. When I found that out, I was perfectly fine seeing him enter the Christian fold.

And now he’s complaining about the sort of thing even atheist legal groups wouldn’t dare go after: He’s mad because his kids’ teacher at East Pennsboro Middle School wears a Star of David necklace. This, he says, violates the law:

“They are there to learn about education, not to learn about religious points of view,” said Ernest Perce, the parent who filed a formal complaint with the district over the necklace.

He says the law is being violated.

What’s wrong with a Muslim teacher covering her head if she wants…?

Anyway, Perce didn’t say what he thought about a teacher wearing a cross necklace or teachers who participate in Ash Wednesday. I have to assume he’d find those illegal, too.

He’s not entirely off-base because a 1949 Pennsylvania law (that appears to still be in effect) says this:

… no teacher in any public school shall wear… any dress, mark, emblem or insignia indicating the fact that such teacher is a member or adherent of any religious order, sect or denomination.

That’s… going way too far. The only thing I’m concerned about is whether a teacher is proselytizing in the classroom. Wearing a personal symbol of faith? That’s one of those things you just let slide because there are far bigger fish to fry. And, in a similar case about a decade ago, the rule of thumb was that teachers could wear religious jewelry as long as they tucked it inside their clothing. We don’t know whether the teacher in Perce’s case refuses to do that.

The school district wrote back to Perce and told him they’re not going to take any action, suggesting that the teacher didn’t do anything wrong. Which means Perce may possibly file a lawsuit against them…

If and when that happens, I just want to remind everyone: He’s a Christian now.

Don’t blame atheists for this one.

November 19, 2014
Holy Hymen: If You Want To Be a Police Woman in Indonesia, Be Prepared For the Two-Finger Virginity Test
Next Post

November 19, 2014 A Nativity Scene at the Michigan State Capitol Could Open the Floodgates to Everyone Who Wants to Put Up a Display
Browse Our Archives
What Are Your Thoughts?leave a comment