In Idaho, Parents Who Commit Faith-Based Homicide Are Immune from Prosecution

We’ve heard the stories of those poor children in Oregon who died after their parents, on account of their religious faith, refused to take them to doctors. The kids died from preventable causes because their health was put in God’s hands instead of the care of those who knew what they were doing. (And who actually existed.)

Last year, thanks to a report by KATU reporter Dan Tilkin (below), we learned that things were even worse in neighboring Idaho.

Shane Dixon Kavanaugh at Vocativ has gone even more in depth as to what’s happening there. It’s incredibly disappointing:

… because of the profound chilling effect Idaho’s religious exemption laws have had on the authorities who might enforce them, those claims have never been put to the test. Not a single criminal charge has been filed in cases of religion-based medical neglect in the state since legislators enacted the law four decades ago. Boise police declined to even report two faith-healing parents in 2010 after they refused medical care for their critically injured son, citing the religious exemption statute. The following year, Canyon County Coroner Vicki DeGeus-Morris told reporters that she had stopped doing autopsies on children who belonged to the Followers of Christ altogether.

Kavanaugh also reminds us that Idaho has the worst laws in the nation when it comes to faith being used as a Get Out of Jail Free card: 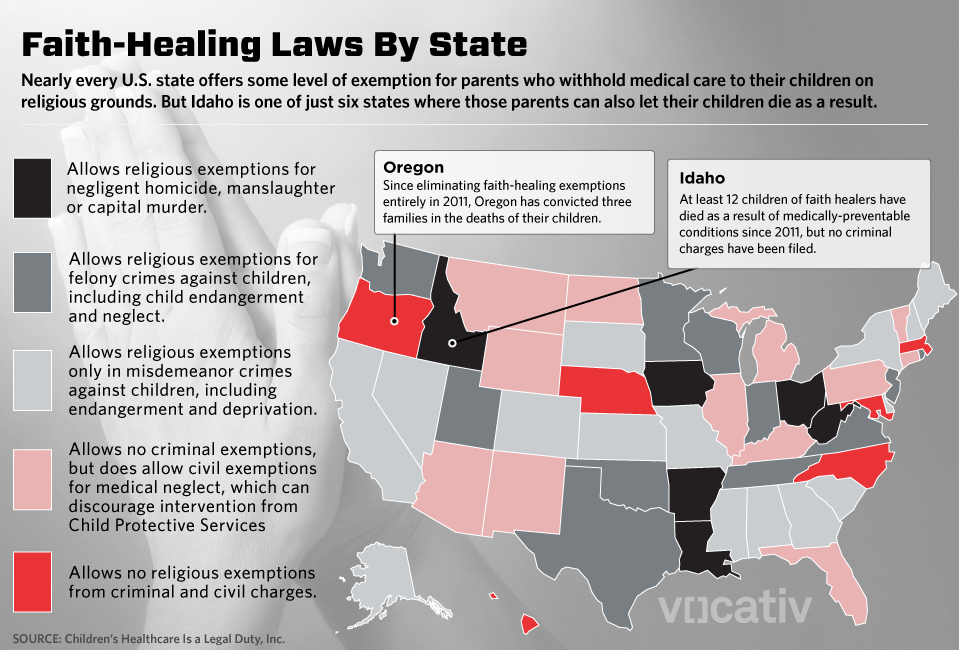 Of the states that still provide a religious defense to felonies against children, Idaho remains in a league of its own. It is one of only six states that provide a religious exemption to manslaughter, negligent homicide or capital murder (the others being Arkansas, Iowa, Louisiana, Ohio and West Virginia). But of those six, it is the only state where children are known to have died at the hands of faith-healing parents in the last 20 years.

The laws need to change and residents need to pressure their representatives to make those changes — before more children die at the hands of their religious parents.

November 18, 2014
The Internet is Forcing Religious Groups to Address Unsavory Aspects of Their History
Next Post

November 18, 2014 Atheist Bus Ads Go Up in Washington State
Browse Our Archives
What Are Your Thoughts?leave a comment