The newly-formed Mid-Columbia Coalition of Reason just announced the purchase of six king-size ads on the sides of Ben Franklin Transit buses in order to introduce themselves to the locals: 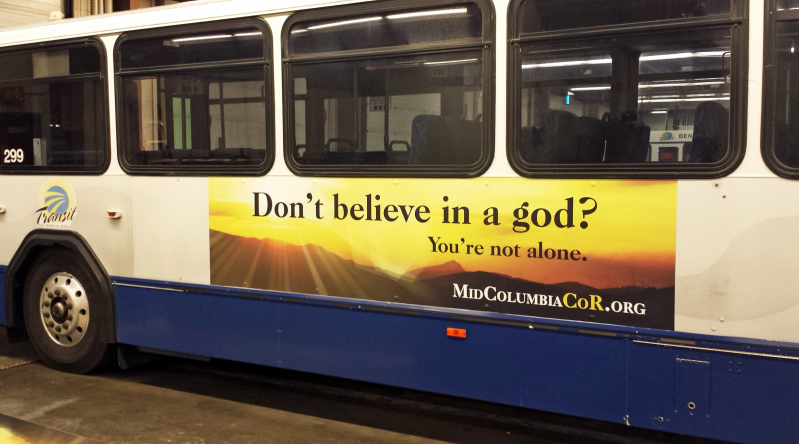 “We want to make our presence in the community known,” said Jennifer Goulet, coordinator of the Mid-Columbia Coalition of Reason.

Goulet added: “Non-theistic people are your family members, friends, neighbors and co-workers. We may not believe in a deity or the supernatural, but we are compassionate, ethical members of this community. We would like to encourage local atheists and agnostics to join us in exercising our freedom to be open about our views. If you are deity-free in the Tri-Cities, know that you are not alone.”

The bus ads, which will be up through mid-December, cost $5,000 and were funded by the United Coalition of Reason, a group that has now placed signs in 37 states in addition to the District of Columbia.

So far, there are no signs of vandalism or bus drivers refusing to do their job because of the presence of the ad.

November 18, 2014
In Idaho, Parents Who Commit Faith-Based Homicide Are Immune from Prosecution
Next Post