Sen. Chuck Grassley Spreads George Washington Quotation About “God and the Bible”… Even Though He Never Said It November 17, 2014 Hemant Mehta

Sen. Chuck Grassley Spreads George Washington Quotation About “God and the Bible”… Even Though He Never Said It

Republican Senator Chuck Grassley of Iowa tweeted this earlier today (and posted it on Facebook, too): 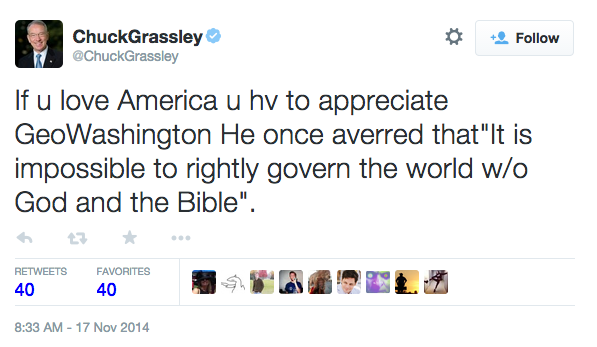 If you love America, you have to appreciate George Washington. He once averred that “It is impossible to rightly govern the world without God and the Bible.”

The problem is that Washington never said anything like that.

According to MountVernon.org, which chronicles these misattributions,

The quote is frequently misattributed to Washington, particularly in regards to his farewell address of 1796. The origin of the misquote is, perhaps, a mention of a similar statement in a biography of Washington first published in 1835. However, the quote that appeared in the biography has never been proven to have come from Washington.

I sent a message to Grassley’s folks asking if he plans to apologize or at least issue a correction for that mistake. So far, no response.

November 17, 2014
Hoaxed By Crickets: Yes, These Critters Make Interesting Sounds. No, They Don't Sound Like a Choir of Angels
Next Post