If You Had Premarital Sex, This Baptist Pastor and College President Believes You’re a “Filthy Dishrag” November 17, 2014 Rachel Ford

If You Had Premarital Sex, This Baptist Pastor and College President Believes You’re a “Filthy Dishrag”

Recently surfaced video reveals some profound thoughts on modesty from Paul Chappell, pastor of the Lancaster Baptist Church of Lancaster California and president of the West Coast Baptist College.

He begins with reflections on “purity.” To fundamentalist Christians, “purity” refers to abstinence and “modest dressing.” As is typical from the “purity” movement, Chappell’s emphasis is entirely on women’s premarital sexual activity and women’s clothing: 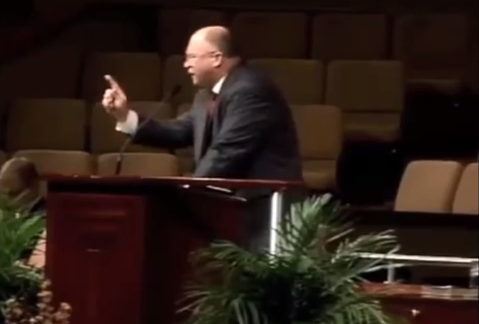 Such appalling dehumanizing of sexually active women is, sadly, not at all uncommon in the purity and abstinence-only movement. (This is particularly troubling when it’s implemented in schools, resulting in children hearing that sexually active people are akin, for instance, to used toothbrushes and chewed up gum: dirty and undesirable.)

After some praise of purity pledges, he declares — apparently without irony — “I don’t want to sound weird tonight.” And promptly gets even weirder:

There’s a reason when ladies come up here to sing… there is a standard in this church that the dresses are going to come down to the knee when a lady stands up here.

… They call me old-fashioned… You say, “Why pastor?” I’ve counseled too many men to know that if we don’t have everything covered just right, they’re not going to be thinking about the wonderful grace of Jesus. Some of you men want to help me with this tonight?

We’re just trying to keep the focus on Him [Jesus].

One of my earliest memories from Vacation Bible School was the pastor explaining to an audience full of children (of whom I was one) and our parents the importance of a godly lifestyle, particularly in reference to modesty. One of his points was, “If I was on the jury for a rape case, I’d take into account what she was wearing. I would.” (I wish I could say that the flaws in this logic stood out to my eight-year-old mind; on the contrary, I was deeply impressed with my duty, as a godly female, to ensure that no action of mine ever led a man to stray in such a fashion).

This is the same mentality — that men’s actions are dictated by women’s clothing choices. It is amazing to me how, while being so preoccupied with controlling the behaviors of women, people making claims like this overlook the implications of their words for men. That women are responsible for what men do, based on whether they’re “covered just right” or not, is obviously harmful to women (as a woman then assumes the responsibility for another person’s actions); it is arguably equally harmful and dehumanizing to men to imply that they are not capable of making their own decisions and choosing their own actions: that the clothing choices of other people dictate what a man may do. How can that be seen as anything short of diminishing the intellectual and moral capabilities of one half of humanity?

But it’s not merely the bared legs of singing women that worry Pastor Chappell — on behalf of his male congregants. He also addresses grievances like seeing “some Jezebel with hardly any clothes on strutting around” weddings and “unsaved women” doing “the exact same thing” at funerals. As he emphatically reminds his audience,

You come to the house of God, it ought not to be a flesh show, it ought to be a place where Jesus is lifted high and his holiness is remembered.

Who knew Jesus could be exalted by shaming women for their clothing…?

And this from someone who was worried, a minute earlier, that people might think he was “weird.”

November 17, 2014
The Bible Would Be So Much Better with Updates...
Next Post