The Pastafarian (whose license has her birth name Jessica Steinhauser but who goes by Asia Carrera-Lemmon online) said she did it in order to make a statement about religious freedom in a conservative state: 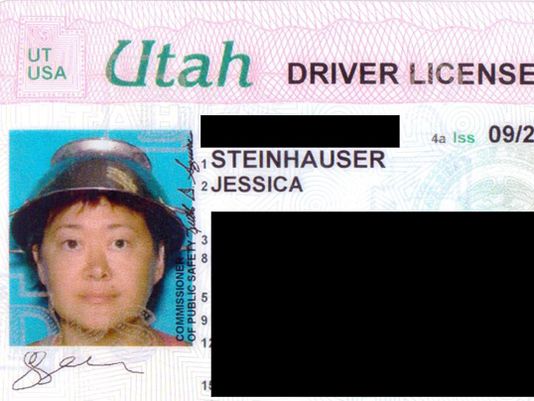 … Steinhauser, an atheist and member of the Church of the Flying Spaghetti Monster, said she wanted to wear the colander, also known as a pasta strainer, on her head for the photo to make a statement.

“I’m a really proud, outspoken atheist,” she said. “I am proud of Utah for allowing freedom of all religions in what is considered by many to be a one-religion state.”

“I think it’s nice, and I’m 100 percent sure Asia is doing this for good-natured reasons,” he said. “Hopefully, the state of Utah will have a sense of humor about it as well. We are fortunate to have her as a member of the church. She’s great.”

Carrera-Lemmon says she’s the first Pastafarian to take a license picture with a colander in the state, though it’s happened a few other times already.

Incidentally, she posted the license image on her Facebook page about a month ago, though it’s only getting some attention now. My favorite part of that conversation is where she discovers that Henderson approves of her actions:

Alright. You may now commence with all your jokes about Noodly Appendages.

November 17, 2014
Christian Protester Says God Made Her Invisible So She Could Disrupt a DC Interfaith Service With Muslims
Next Post