If you attend a meeting of the Chino Valley Unified School District Board of Education (in California), you’d think you were at a church service.

School boards, unlike city councils, are not supposed to have prayer of any sort because children are often present. But these board members never got the memo: 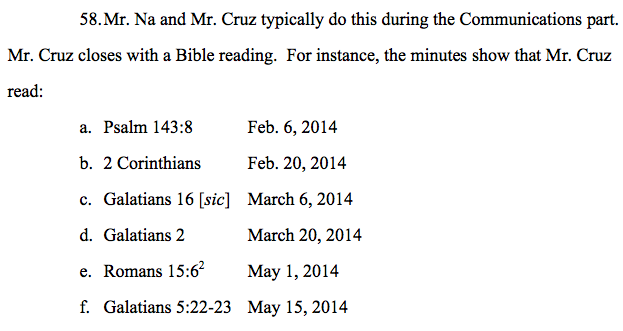 The meetings also have plenty of references to the Christian God. And for that reason, the Freedom From Religion Foundation filed a federal lawsuit against the district late last week.

Plaintiffs include a student in the district, two parents, and a district employee — so at least standing won’t be a problem. The issue here is that you have board members who don’t know the difference between church and state. They see school board meetings as an extension of the pulpit, where everyone in the room is just a target for proselytization no matter the age. (FFRF is looking for additional plaintiffs, too! Let me know if you’re in that district and I’ll put you in touch with them.)

It’s hard to see how the school board comes away victorious. And, unfortunately, it’s the students who will ultimately suffer because of the selfishness of the board members.

November 17, 2014
If You Had Premarital Sex, This Baptist Pastor and College President Believes You're a "Filthy Dishrag"
Next Post

November 17, 2014 Today, I'm Saying Goodbye to My Old Self
Browse Our Archives
What Are Your Thoughts?leave a comment