Christian Protester Says God Made Her Invisible So She Could Disrupt a DC Interfaith Service With Muslims November 17, 2014 Terry Firma

When Christine Weick found out that there was going to be an interfaith service in Washington DC’s National Cathedral, she knew she had to do something against the intolerable spectacle of Christians and Muslims getting prayerful together. How did she know? The usual: “This is what God has put in my bones to do,” she explained to a few confidants.

In an interview with World Net Daily, Christine Weick, 50, said she read about the event on Drudge and became enraged, saying, “My blood began to boil as I read the comments of how this is to be such a wonderful event and how religious tolerance can, for the first time, be shown in our nation’s capital.”

Coincidentally, we’ve featured Christine Weick on this blog before. In May of this year, she was on the receiving end of a Slushie when she protested against equal rights for gay people.

Friday’s prayer service was just beginning when Weick stood up and began walking towards the front of the cathedral shouting. “Jesus Christ died on that cross. He is the reason we are to worship only Him. Jesus Christ is our Lord and Savior,” she said. “We have built … allowed you your mosques in this country. Why don’t you worship in your mosques and leave our churches alone? We are a country founded on Christian principles.” 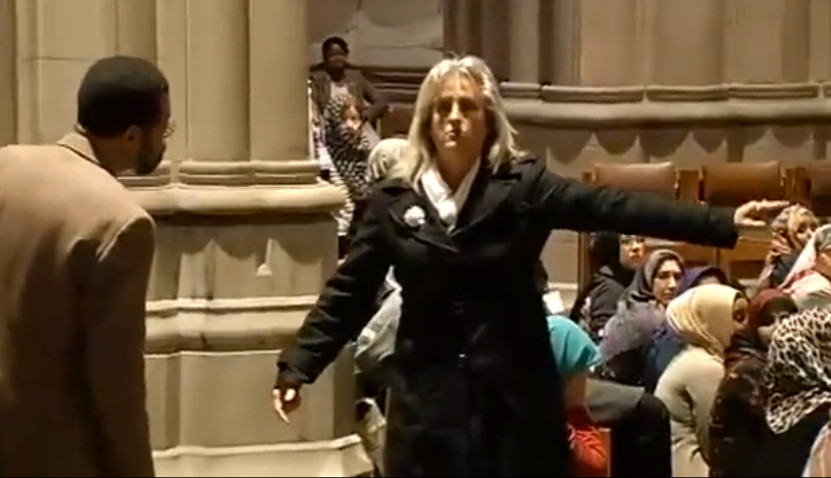 It wasn’t what she had intended to say.

“I did not plan on those exact words coming out. I was going to say it differently. I was planning to say, ‘I serve a risen Savior, and Muhammad is dead.’ But I saw the cross and it just popped out of my mouth. I was not going to say it that way. I rehearsed it the other way over and over in the bathroom, because my biggest fear was making a fool of myself.

By the way, Weick knew in advance the interfaith service was only for invited guests, but that wasn’t a problem, because God made her temporarily invisible.

“It was a God thing how I got past all that security in the beginning. They never ID’d me, and I had brought my ID with me just in case, and I thought that would be my downfall, being from Michigan, that they would say, ‘What is she doing here?” Weick explained. …

After slipping into the cathedral, saying she felt like God had made her invisible, Weick said she was appalled by what she saw. … “Seeing these Muslims sitting on their rugs ready to bow to a god, causing such an abomination in the house of the Lord,” she said. That was when Weick spoke up and was subsequently ejected.

She was escorted out of the cathedral, but not arrested. Divine providence, I guess.

After being ejected, Weick said she got into her SUV and began the 400-mile trip back to Tennessee where she says she lives in her car after being disowned by her family because she took a stand against same-sex marriage and other “moral issues.” According to Weick, her husband divorced her last year “over a spiritual conflict.”

Sounds like Jesus is really looking out for her.

P.S. Only twice in the World Net Daily article is the Almighty referred to as god with a lowercase g. The publication reverently used a capital G when the subject is the Christian creator. God is lowercase, however, when the reference is to the Muslim deity. Interesting.

P.P.S. Among the comments at World Net Daily:

That woman stood as we should all do. If we do not, our families will go to an eternal Hell.

If we wouldn’t have allowed our national landmarks and buildings to get over run by foreigners, NWO Illuminati, Lucifarian, Satanists, Marxists, Fascists,Stalinist, Socialist, Soviets, Eugenicist, the Feudalistic and political correctness including corrupt criminal banksters money rule instead of Yahweh Rule in the Lord Jesus Christ.

The citizens everywhere have to know how the muslims are taking over here. We have a muslim in the WH and somebody needs to let him know how wrong he is too. At this time he is going to try and court-martial Christians in the Military, he is also taking down crosses that have stood for years. It was O that told the FBI to declare the koran the true word of God, but they don’t worship God, it’s the devil they bow to.