Camp Quest, the summer camp for children of atheist parents, is raising some much-needed funds by creating a deck of cards featuring famous freethinkers. But they don’t know which ones will appear on the face cards. That’s where you come in. 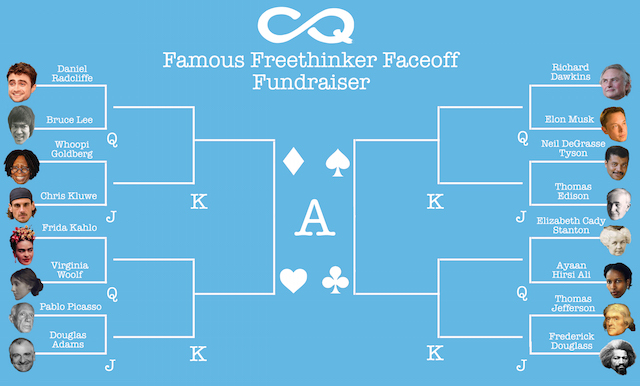 It begins with the single head-to-head match-ups:

Freethinkers who win this round will go on to compete to be the King or the Ace, while the losers will be the Jacks and Queens. The first round closes on December 1, 2014, but a Freethinker can win by getting to $2,500 first, so don’t wait until the deadline and find your favorite freethinker has already lost! The second round of the contest will run from December 2nd through December 8th, and determines the four Famous Freethinker aces!

Even if you don’t care about the cards, it’s a great cause. So pick someone you like — I’m going with Ayaan Hirsi Ali — and make a donation!

November 15, 2014
Help the Pennsylvania Nonbelievers Feed the Hungry
Next Post