Penn & Teller Urge You to Be Openly Secular, If You So Choose November 15, 2014 Hemant Mehta

Penn & Teller Urge You to Be Openly Secular, If You So Choose

The Openly Secular campaign, which encourages non-religious people to say as much publicly, no matter what label they use, just got a nice boost from magicians Penn & Teller: 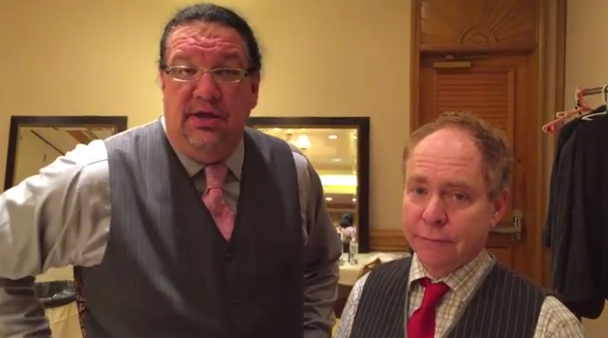 They (by which I mean Penn) spoke about how they’ve never shied away from their atheism, but they understand if you’d prefer to keep that to yourself:

But, just wanna tell you, over the years, we’ve noticed — like a lot of things — it’s getting a lot better. We are really not punished very much for saying we’re atheist. As a matter of fact, we’ve done pretty well, and it seems like people are getting more accepting, at least in this country…

If you’re considering coming out, telling people you’re an atheist, we’d like to welcome you on board.

Great message, and you can see some of the other videos from celebrities right here.

November 14, 2014
Miami-Dade Commissioners May Soon Put Up "In God We Trust" Motto in Their Chambers
Next Post

November 15, 2014 Bible Edges Out Darwin in U.K. Poll About "Valuable Books," but Reason and Science Dominate the Top 10
Browse Our Archives
What Are Your Thoughts?leave a comment