Bible Edges Out Darwin in U.K. Poll About “Valuable Books,” but Reason and Science Dominate the Top 10 November 15, 2014 Terry Firma

Bible Edges Out Darwin in U.K. Poll About “Valuable Books,” but Reason and Science Dominate the Top 10

Which book is most valuable to humanity? Predictably but depressingly, even in the rapidly secularizing British Isles, the most common answer is the Bible.

The Bible has been voted more valuable to humanity than Charles Darwin’s On the Origin of Species by the British public. The Folio Society survey conducted by YouGov asked members of the public to name the books of most significance for the modern world.

A total of 2,044 adult respondents were asked to pick the three most important books from a list of 30. The resulting Top 10 looks like this: 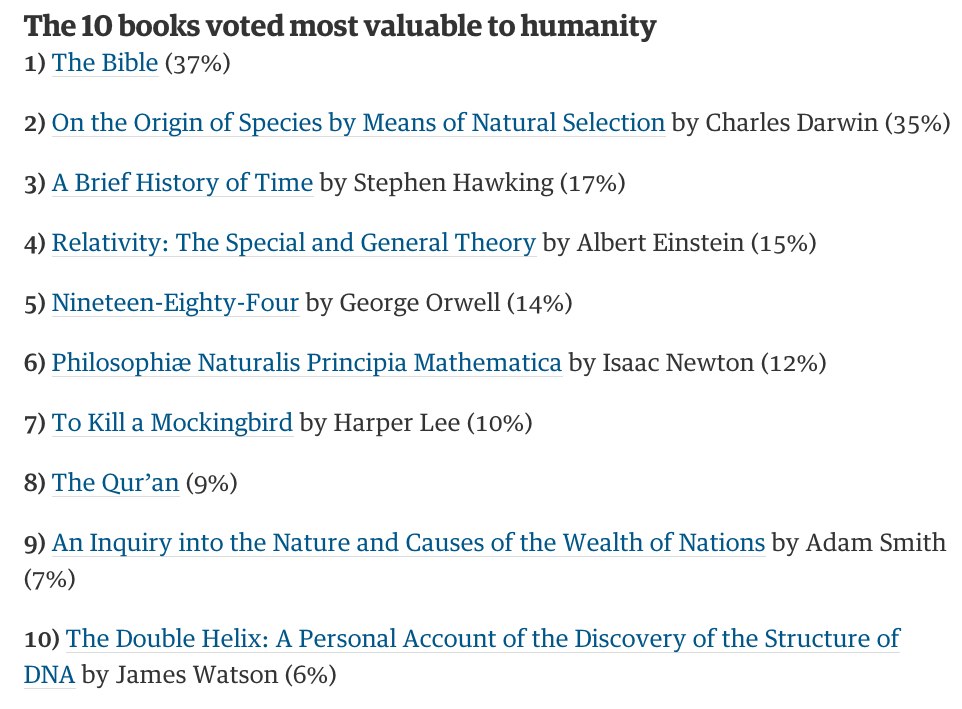 On the Origin of Species was chosen because it “answers fundamental questions of human existence”, while the Bible was cited because it “contains principles / guidelines on how to be a good person.”

You can see for yourself just how good a person you would be if you followed the Bible more or less to the letter. Caution: strong stomach needed.

Stephen Hawking’s A Brief History of Time (17%) crept ahead of Einstein’s seminal Relativity (15%) to take third place, with just two novels making the top 10 of the “books voted most valuable to humanity”: Nineteen Eighty-Four (14%) and To Kill a Mockingbird (10%). Philosophiæ Naturalis Principia Mathematica, in which Isaac Newton derives the laws of classical mechanics, took 12% of the vote, with the Qur’an (9%), Adam Smith’s foundation of modern economics The Wealth of Nations (7%) and James Watson’s account of the discovery of DNA, The Double Helix (6%), rounding out the top 10. …

Darwin, Hawking, Einstein, and Newton, representing science and critical thinking, have more than double the votes of the Bible; and when we add both Watson’s book and the Qur’an to the canon, science still handily beats religion by a factor of almost two.

Two caveats: I bet there are a lot of aspirational choices here (that’s a nice way of saying that the answers given were, I think, influenced by a desire to seem cultured, which would mean that respondents picked books as a means of highbrow social signaling). Isaac Newton’s Philosophiae Naturalis Principia Mathematica landing on number six may be the best indication of that; after all, the book, published in 1687, is fairly inscrutable to most modern readers. Also, it’s doubtful that more than an infinitesimal number of respondents has read all or even most of the 30 books on the list.

Still, even if some degree of poserism is indeed evident, it’s encouraging that the participants at least knew to identify and pick milestones of scientific progress.

I’d love to see the poll duplicated in the United States, but I fear the results will be much, much worse for agnostics and science aficionados.

November 15, 2014
Penn & Teller Urge You to Be Openly Secular, If You So Choose
Next Post

November 15, 2014 A "Real" Psychic Tells Us How to Spot a Faker
Browse Our Archives
What Are Your Thoughts?leave a comment