The Little Pebble Has Been Paroled, Free To Resume His Leadership of Australia’s Craziest Cult November 14, 2014 Terry Firma

The Little Pebble Has Been Paroled, Free To Resume His Leadership of Australia’s Craziest Cult

William Kamm, a.k.a. the Little Pebble, a name given to him by the Virgin Mary, will be back on the street within a week. The German-born Australian cult leader just got paroled after spending nine years in prison for multiple sexual assaults on two underage girls, crimes that flowed from his belief that he’s been chosen by God to become the next Pope, but without the required celibacy.

Kamm is the head of the Order of St. Charbel, a cult group that claims to fall under the hierarchy of the Catholic Church. The Vatican begs to differ.

Kamm claims the Latin Rite rules of obligatory celibacy do not apply to him, not even if finally declared “pope” sometime in the future; nor does it apply to the priests of his order. 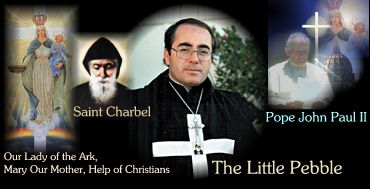 On 14 October 2005, Kamm was sentenced to five years in prison with a non-parole period of three-and-a-half years for a string of sexual attacks including aggravated sexual assault on a 15-year-old girl. He claimed that she was one of his 84 mystical wives.

The assaults occurred when the girl was living within Kamm’s Order of St. Charbel, a community … near Nowra, New South Wales. Kamm claimed to have received advice from the Blessed Virgin Mary that the girl should be chosen as one of 12 queens and 72 princesses who would all become his wives, with whom he would spawn a new human race after the world was cleansed and burnt by a ball of fire. …

Kamm was also found guilty in May 2007 of aggravated sexual assault and aggravated indecent assault in relation to another 15-year-old girl. In August 2007, after losing an appeal on his original sentence, Kamm was re-sentenced to a total of 15 years imprisonment.

ABC Australia has an article about Kamm’s pending release in which Ros Hodgkins, who heads the Cult Information and Family Support Service in New South Wales, sounds a bit worried about the cultist’s followers — present and future:

She says their mindset prevents them from thinking any negative thoughts about their group because it’s reinforced as a sin.

Having their leader convicted and sentenced like Kamm can also be turned into a positive for the group, who can believe he is being persecuted in the same way Jesus Christ was.

Echoes of American Christian conservatives, you might say. But Kamm’s beliefs are more bizarre by a mile.

One of Kamm’s claims is that Pope John Paul II will rise from the dead and reappear on the surface of the world again to fight evil along with Benedict XVI and possibly to appoint Kamm.

It’s tempting to dismiss William Kamm as a pitiable buffoon, but we can’t forget that his delusions caused him to rape two teenage girls.

The man who ran the Ugandan cult, Joseph Kibweteere, now a fugitive, has a son who told the Guardian that his father had corresponded with Kamm, and that the two had even met in Kampala.

“I remember [my parents] going, and when my father came back he said that Little Pebble had filled him with new hope.”

Said a man from Kanungu as he watched some of the cult members’ corpses being exhumed,

“They were religious people. We would never have expected them to kill.“

Let’s hope no one will have to say the same thing about Kamm and his followers.

November 14, 2014
A Christian Explains the Qualities Our Next President Must Possess (Spoiler: Hillary Clinton Fails on All Counts)
Next Post