Man Who Tried to Hook Up With 12-Year-Old Girl Gets Extra-Tough Sentence Because He’s a Pastor November 14, 2014 Terry Firma

As much as I loathe child-soliciting creeps like youth pastor Deric Peacock, I’m not entirely sure it’s a sound application of legal principles to give him a tougher sentence than a non-clergy perp.

Deric Peacock, 30, was sentenced to serve five years in prison … by [Virginia] Circuit Court Judge Marcus Long. Peacock had online communications in which he exposed himself and said he fantasized about having sex with what he thought were a 12-year-old girl and her mother, but both were in fact a Christiansburg Police Detective. 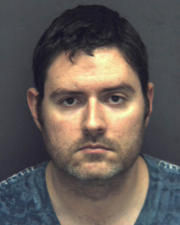 Long sentenced Peacock to a total of 20 years, but suspended 15. The five-year sentence is 18 months above the high end of usual guidelines in such cases, county Commonwealth’s Attorney Mary Pettitt said. [The judge] agreed to go above guidelines because of Peacock’s role as a minister.

Criminals like this guy rub me the wrong way twice: once for their lawbreaking, and again for their stunning hypocrisy. I feel the same way about IRS employees who commit tax fraud, and about cops who do anti-drug-PSAs… and get caught stealing drugs.

However, being a hypocrite is not, in and of itself, a jailable offense. And what about the bedrock principle of equal treatment under the law?

Why do you agree or disagree with the sentence the judge imposed?