For years now, the Freedom From Religion Foundation has been in a legal battle to end the “Parsonage Exemption” that allows ministers to deduct the cost of rent for their church-owned houses from their taxable income. FFRF believes that this shows preferential treatment by the government for religious leaders.

FFRF’s own board has even paid its co-presidents Dan Barker and Annie Laurie Gaylor $15,000 each as part of their housing allowance, but because they don’t qualify as “ministers of the gospel,” the law doesn’t apply to them. That’s one of the ways they’ve tried to prove the law is illegal.

A year ago, U.S. District Judge Barbara B. Crabb ruled in favor of the FFRF, writing that the exemption was indeed unconstitutional.

Which was just the judge’s polite way of saying: 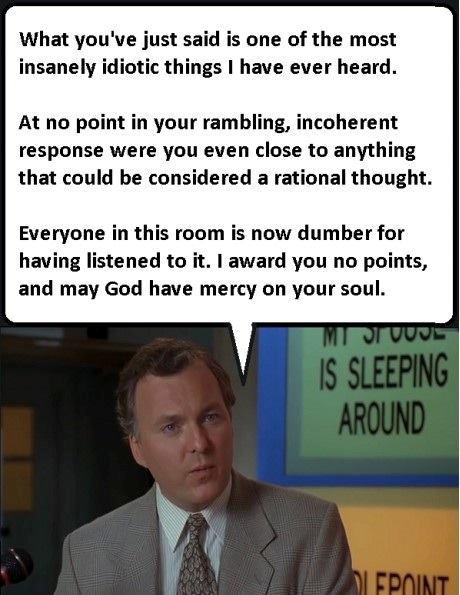 A bit of history: This whole battle has been over Internal Revenue Code section 107, which states:

It has always been about advancing religion and keep down atheism.

And last year, Judge Crabb righted that wrong. That it came nearly 60 years after the law first went into effect was perhaps a sign that tradition alone isn’t a good reason to continue bad policy.

Pastors, of course, will argue that they deserve the exemption — they provide an important service for others and their salaries are (usually) very modest. But then again, teachers could say the same thing, and it’s not like they’re getting a tax break as nice as this.

Not surprisingly, there was an appeal. In September, the Seventh Circuit Court of Appeals heard arguments that could overturn Crabb’s ruling, but according to people present that day, the focus was really on whether FFRF had standing to sue:

[Justice Department attorney Judith] Hagley also argued taxpayers do not have the right to litigate the tax liabilities of others. Since this is a tax issue that does not apply to the plaintiffs, she argued they should not even have standing for this case.

In other words, even if the pastors were getting an unfair tax break, who the hell are you people to complain about it? (Then again, if FFRF can’t fight this battle, could anyone?)

Today, we learned the outcome of that discussion.

The Appeals Court has ruled against FFRF, leaving the Parsonage Exemption in place. It’s hardly a silver lining, but the ruling was based entirely on standing, not the merits of their argument:

In essence, the Court ruled that if FFRF wants to change the Parsonage Exemption, they should speak with a member of Congress and get a new law passed, because suing isn’t a viable option.

FFRF also has the option of applying for the tax credit themselves, getting rejected, and then suing all over again. I don’t believe they have any intention of doing that because it would require calling themselves “ministers” of atheism, so to speak, a title they strongly disavow.

A few other tidbits:

Forbes points out that there’s a desire to strengthen the exemption so it’s not challenged in the future:

Congressman Bill Cassidy, who is now in a hotly contested runoff for a Senate seat for Louisiana, has introduced legislation to extend “minister of the gospel” status to duly recognized official of religious, spiritual, moral or ethical organizations to protect the dubious constitutionality of the parsonage exclusion.

The Becket Fund for Religious Liberty, which loved the ruling, had an interesting take on FFRF’s challenge:

“This is a great victory for fair treatment of churches,” said Luke Goodrich, deputy general counsel for the Becket Fund for Religious Liberty…

“When a group of atheists tries to cajole the IRS into raising taxes on churches, it’s bound to raise some eyebrows,” he said. “The court was right to send them packing.”

How’s that for spin? FFRF didn’t want to “raise” taxes on churches; they wanted to remove an unfair tax break that church leaders get. It may amount to the same thing financially, but the motives are very different. This wasn’t about spite. It was about equal treatment in the eyes of the government.

FFRF now says they plan to regroup. They can always appeal to the full Seventh Circuit, but there’s no guarantee all the judges will want to reopen this case. They can appeal directly to the Supreme Court, but there’s virtually no chance they’ll get heard there (or win).

Gaylor and Barker took issue with the appeals court’s cavalier assessment that they have suffered no concrete injury, since they must pay taxes on their housing allowance, while ministers are rewarded, simply for being religious leaders, with a unique and substantial tax benefit. The parish allowance is not a tax deduction but an exemption — housing allowances are subtracted from taxable income.

“We will continue to challenge this indefensible favoritism for religion in other forums until the issue cannot be circumvented,” Barker said.

Barker, by the way, is a former minister who was rewarded with this subsidy when he was “Reverend Barker,” a believer, and is now penalized as “Mr. Barker,” serving as a freethought leader.

It’s certainly a disappointing ruling, but I have to say it’s not a surprising one. We’re so used to privileging religion in this country that it’s hard to imagine how any court was going to remove one of the biggest perks of pastoring.

November 13, 2014
A Good Idea? Maryland County Schools Decide To Strike All Religious Holidays From Next Year's Calendar
Next Post