It was only September when we learned that police officers in Rochester, New York were working with clergy members in order to patrol the streets. The unholy partnership, while it may have had strategic aims, still promoted religion in a questionable way.

Turns out Fort Worth, Texas is doing the same thing. In fact, the Clergy and Police Alliance (CAPA) has its own website, Facebook page, and slideshow: 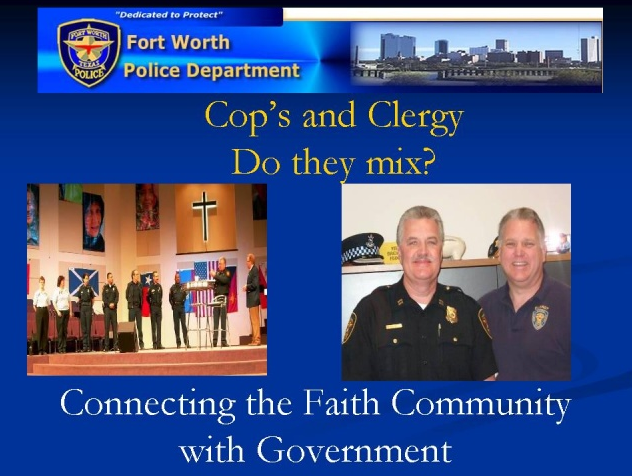 Some of the goals of this program include: pray for our City, city leaders, police officers and special needs; assisting the police in non-traditional roles; provide calm in crisis situations to prevent an escalation to violence; assist in domestic situations where a minister is requested or needed; offer support to victims; relay factual information back to the neighborhoods using your established networks; and emergency and disaster response training through the Citizen Emergency Response Team (CERT).

Oh. And the Facebook page is apparently used to raise money for the purchase of Bibles:

To casual observers, this may not seem like a big deal. It’s smart for police officers to partner with community leaders. The problem, though, is that the way this program is structured, it’s a government endorsement of Christianity.

The American Humanist Association’s Appignani Humanist Legal Center explained as much in a letter sent to city officials yesterday:

Note that even the name of the program is disconcerting, as it implies that religious police are patrolling the city’s streets — an image that is abhorrent to a free and democratic society. But the problematic aspects of the program go even much further. In directly contradiction to constitutional standards, the department is officially calling upon clergy and their followers to pray — hardly standard police policy or procedure, and a direct endorsement of religious practice. Moreover, the department even acknowledges that the program serves the purpose of allowing religious clergy to “extend your ministry outreach,” thus making the intent and effect of the program unconstitutional.

There is nothing preventing a pastor from proselytizing religion or from coercing citizens to pray. A citizen approached by a pastor vested with apparent police powers may feel compelled to conform to the religious beliefs of the clergy in order to avoid adverse consequences of law enforcement. Worse, the clergy may unfairly target members outside of his religious congregation for differential treatment.

The AHA is asking the police department to eliminate the program altogether if it wants to avoid a potential lawsuit.

It’s incredible how officials never thought this would be a problem; it would be easy, and perfectly constitutional, to change this program so that all community leaders are invited to participate, not just religious leaders.

While the goals of the program are laudable, there are plenty of ways to achieve them without expanding ministerial opportunities for pastors — something they should be doing on their own.

November 12, 2014
After Raping a Pre-Teen Boy, Christian Broadcaster Will Spend More Than 25 Years in Prison
Next Post