Christian persecution, I tells ya.

A Del Mar [California] man convicted of raping two women he met on the online dating sites ChristianMingle.com and Match.com was sentenced Friday to 37 years to life in prison. In his final statement before he was punished, Navy Lieutenant Sean Banks quoted what he said was his favorite Bible verse. “You intended to harm me, but God intended it for good,” Banks said.

If your Bible knowledge needs some refreshing, that’s Genesis 50:20. 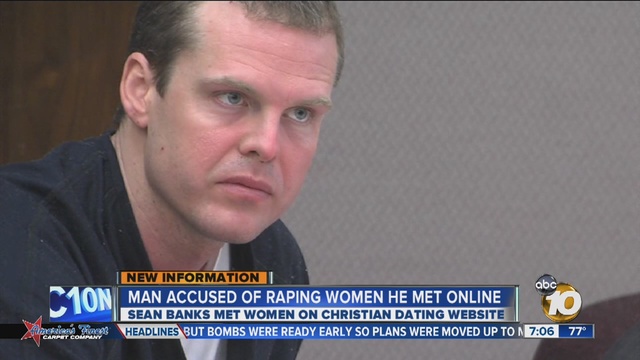 Banks’ words apparently didn’t put him in good graces with the judge, who gave him the high end of the sentencing range and denied him probation. In handing down his sentence, Judge Daniel Goldstein expressed dismay that Banks continues to portray an innocent facade and has shown no remorse for his actions.

The judge also said he believed the two women gave truthful accounts of the rapes — which Banks had argued were untruthful.

“He has so much hatred toward women,” the judge said, referring to Banks’ interview with investigators, where he laid blame on the victims.

After he raped the ChristianMingle victim,

Banks sent [her] a text stating that he was sorry for standing her up, so that people would think that he had not been in her apartment.

Crafty. Didn’t work too well, though. And neither did this bizarre plea:

“She probably put some of the actions of Jesus on me,” Banks testified. “So me kissing and doing these things with her was tantamount to Jesus doing that.“

Maybe Banks would’ve preferred to be sentenced by a Christian version of a Sharia court. Should such an august body become a reality, we might just see the judge deal with rapists Deuteronomy-style:

If a man is caught in the act of raping a young woman who is not engaged, he must pay fifty pieces of silver to her father. Then he must marry the young woman because he violated her, and he will never be allowed to divorce her.

Remember, always read your Bible for the best advice on how to be moral!