Once Again, No One Is Upset When Carrie Underwood Sings About God November 11, 2014 Hemant Mehta

Once Again, No One Is Upset When Carrie Underwood Sings About God

Only a month ago, right wing websites were running with a story about how atheists were up in arms over Carrie Underwood‘s new single “Something In The Water” because it had religious references in it.

And those articles never bothered to mention which groups or individuals they were talking about. They had a catchy headline — and that was enough!

A site calls “Hot Moms Club” posted an article yesterday with a headline suggesting that Underwood was told not to sing that song at the recent Country Music Awards… but did it anyway!

They Told Carrie Underwood Not To Sing About God. Then She Did THIS.

But if you read the article, it’s apparent that the “They” in the headline is never specified. The piece says she sang the song and it got a great reception… without even mentioning how anyone told her not to sing it.

It’s pure Christian Persecution Complex clickbait. What’s more is that many of their commenters on the site fell for it hook, line, and sinker. So did their Facebook readers (who clearly didn’t read the article but made judgments based on the headline alone): 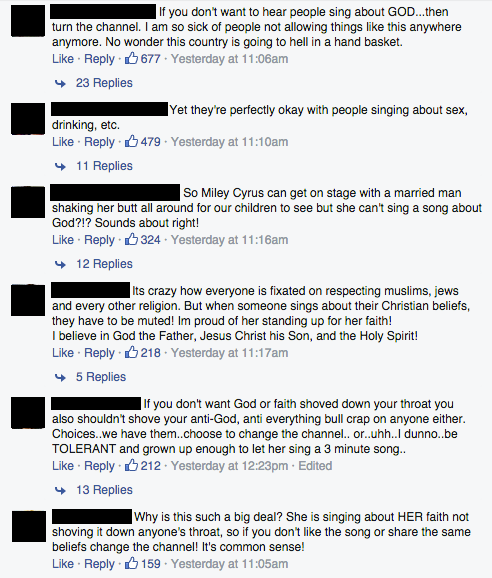 Only a handful of commenters at both places dare point out that the headline is misleading. (And silly, too, because why on earth would anyone tell a singer not to bring up God at a country music event? You might as well tell them not to mention heartbreak and trucks.)

It just shows how quickly this news spreads because people want to believe it, even when there’s no evidence to suggest it’s true.