More than 20 years ago, Nat Hentoff penned a book that was an eye-opener for me. It’s called Free Speech For Me But Not For Thee — How the American Left and Right Relentlessly Censor Each Other. My sympathies at the time were with progressive politics, in part because I had often read about instances of rightwing authoritarians — from actual dictators to school boards stacked with hardline conservatives — trying to muzzle expressions on the left. Although I associated Hentoff with lefty bastions like The Village Voice, the weekly where he worked for half a century, in his book he was committed to documenting free-speech attacks from both sides of the political divide. That was courageous, I thought. Hentoff led me to become better at spotting — and fighting — efforts to muzzle dissent in all kinds of places, no matter the speaker’s ideology or political preference.

One of the goals of this blog is to give atheists a strong voice, and so we find ourselves in opposition to religious privilege on an almost daily basis. However, Hemant and I have also frequently defended religious people, coming out in favor of letting them say their piece when they have the constitutional right to do so, and condemning efforts to shut them up or shout them down. Some examples are here, here, here, here, here, here, and here.

This is all by way of saying that it’s an odd sensation to be accused of wishing to forcibly shove people into the closet for the crime of expressing their views. Yet that’s precisely the allegation that Michael Brown makes. Brown is a columnist for Charisma News. I wrote about him last week, calling out his oversized Christian persecution complex. He didn’t like the piece, as I figured he wouldn’t, and as is certainly his right. But in rebutting it, he badly misrepresents what I wrote, starting with a mendacious headline: An Atheist Tells Me to Keep My Faith in the Closet. 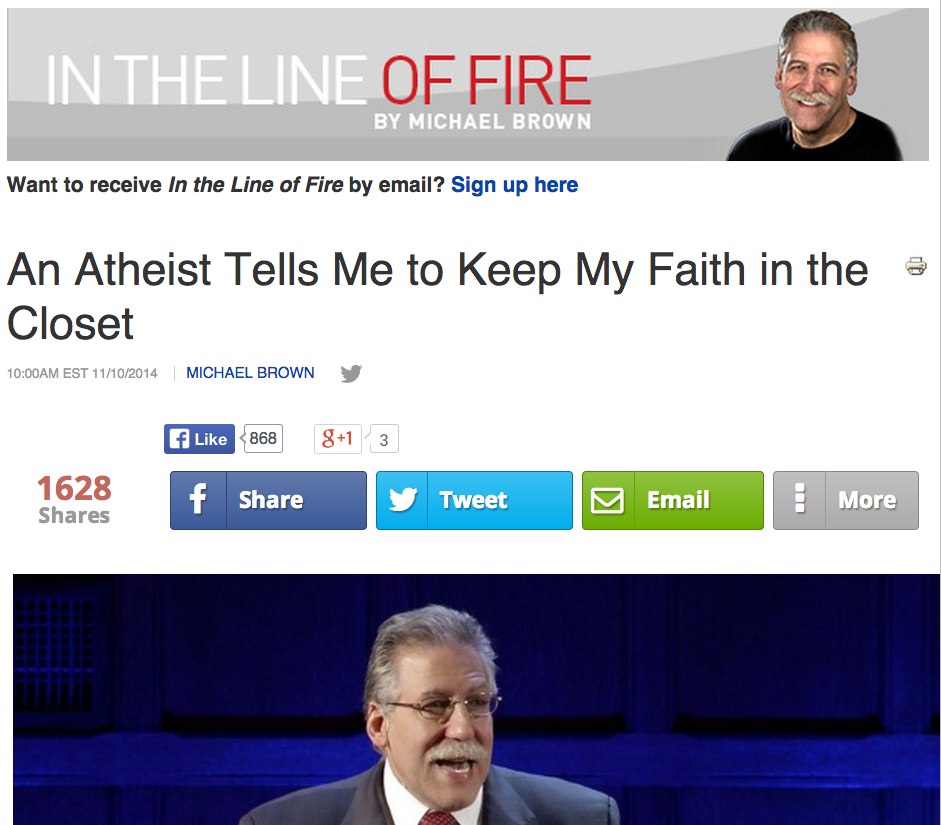 Interesting, because this is what I wrote last week:

Most of us… are quite happy, if not adamant, to preserve the right to believe and speak as one sees fit for everyone, believer or agnostic. As long as the faithful keep their religion out of the public square — that is, out of our public schools, and away from the business of a neutral government — we should all get along relatively well. If Mr. Brown seeks a truce between the religious and the non-religious, all he and his fellow believers need to do is (a) tone down the hateful rhetoric, all Jesus-like; and (b) keep their worship and their rule books confined to places where they are constitutionally appropriate. Problem solved.

Brown presents this as self-evident proof that I am trying to shut him up and drive Christians into the closet.

The irony of that accusation is that if anyone tried, I’d be on the virtual barricades next to him.

The point is simple and yet Brown pretends (I think) to miss it completely. It is this: Neither his view of religion nor mine nor anyone else’s ought to get the government’s tacit or explicit endorsement. Crosses (or plaques with Richard Dawkins quotes) have no place in public parks. Ten Commandments monuments may not be installed in courthouses. Teacher- or student-led prayer cannot be part of the public-school curriculum.

This ought to be as sacred a principle for Christians as it is for secularists, unless Jesus lovers want to open the door to this:

It’s a very good thing, for Christians and everyone else, that there are court-tested constitutional restrictions on government endorsement of religious messages in public spaces.

However, that’s not the same at all as saying that no expressions of religion may be uttered publicly.

Look: Michael Brown and his friends should proudly wear their Jesus T-shirts literally anywhere they please (hell, I enjoy wearing mine too). 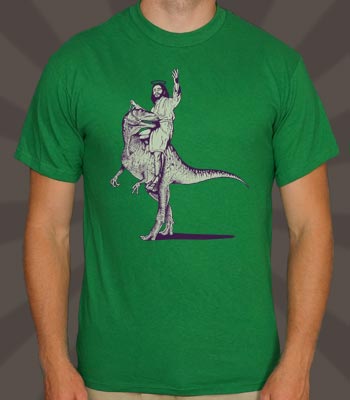 In addition, Christians (and everyone else) may preach on street corners and village greens. They may quietly pray in classrooms and government buildings, and loudly pretty much anywhere else. They may write and publish as many articles and make as many protest signs as they wish. They may congregate and petition the government and glue plastic fish to their cars and erect crosses on private land and place nativity scenes on church property and put up billboards in a hundred thousand public places.

And if someone tells them they can’t, I will be among the ones who will try to set that person straight.

Does that sound remotely like I want to jostle believers into some proverbial closet and gag them? If not, maybe Mr. Brown can help me out: What’s the penalty for breaking the commandment against bearing false witness?

P.S.: Another measure of Michael Brown’s trouble with the truth is that he acts baffled when I bring up the Christian-led persecution of gay people in Uganda. “What does Uganda have to do with the Christian-Right in the U.S. and Europe?” he fake-wonders. Of course, he doesn’t tell his readers, and pretends not to have read, that I mentioned exactly what the connection is. In my piece, I referred to the kill-the-gays bill in that country that was enthusiastically advanced by many of his Christian brethren in the U.S., including homophobic evangelists like Scott Lively and Lou Engle.

There’s also a movie about it, God Loves Uganda, which one national critic described as “A searing look at the role of American evangelical missionaries in the persecution of gay Africans.” I almost wish it were required watching for anyone who plays dumb on the subject.

P.P.S.: Next time Brown writes about an article he read on another website, maybe he could try a little harder to get at least the name right. While I am happy to use reason and logic as best I can, and highly recommend the same for Charisma News scribes and their readers, I have in fact never written for anything called “Thinking Atheist.”

P.P.P.S.: Charisma News commenter S_O_T_A, evidently taking his cues from Brown, weighs in with a very special message to me. For starters, he or she believes I have “nazi tendencies,” and that my reference to Supreme Court decisions can be summarily dismissed because

The Supreme Court is incrementally becoming dominated by reprobates. Dressing them in robes doesn’t make them smarter or more moral…

The fact is you can’t fathom real freedom and seek to squash it — you want people to be dictated to by the likes of you and your other misrepresentations of the Constitution. The idea that the US founding fathers would’ve supported no prayer in schools or no Ten Commandments etc. would’ve been crazy to them. But what can you expect from someone who apparently has no problem with murder, lying, adultery, disrespecting parents, stealing, etc. What kind of person would have a problem with the Ten Commandments?

It will neither please nor convince S_O_T_A, but here’s a video of exactly such a person, who explains his “problem” with the damn Decalog rather well.

November 11, 2014
Blessed Blasphemy: In a New Comic Book, Mankind's Savior Is Relentlessly Nagged By His Petty Wife — On the Cross!
Next Post