A few days ago, Jason Heap filed a federal lawsuit against the U.S. Navy and the Department of Defense for rejecting his application despite his stellar credentials.

Fox News chatted about the lawsuit yesterday morning — and who better to bring in to discuss it than Jason Heap Father Jonathan Morris, the conservative Catholic who opposes church/state separation? 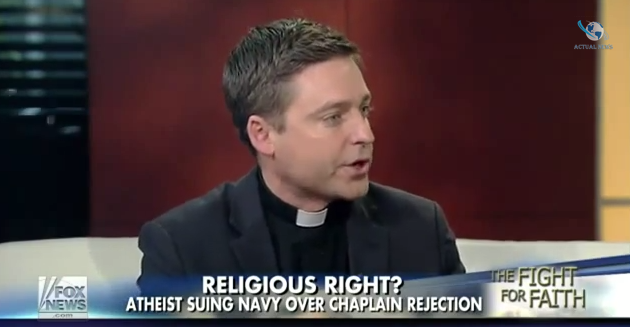 His main argument boils down to semantics. The word “chaplain” is religious in origin, so that should be the end of discussion. Screw all those atheists in the military who want counseling from someone who understands where they’re coming from!

Interestingly enough, Morris later explains that atheists are free to get together and discuss their beliefs just like they do at Columbia University, where he serves as a Religious Life Adviser. Indeed, he says, he has an atheist colleague who leads those discussions. Why can’t atheists in the military just do that?!

So the terminology issue is just idiotic.

Not to mention there are privileges in the military that come with being a chaplain in name, the least of which is that conversations you have remain confidential. Soldiers don’t get that privacy with a counselor who may have a different title.

He claimed that, because Heap was suing the military, he’s really just trying to bring down the chaplaincy:

I don’t know [Heap’s] intention, but based on the fact that he’s suing now, the military, he’s obviously saying, you know, “I don’t like this whole chaplaincy thing at all. I don’t think our government should be supporting anybody who is promoting religion”… Don’t try to get rid of something that is good just because you don’t happen to like it!

Of course, that’s a complete straw man. Heap wants to become a chaplain because he respects the chaplaincy. It’s not illegal for the government to have chaplains who serve people of all religious beliefs (and none, too). And that’s the problem: Right now, the chaplains only serve religious soldiers (and not even all of them), and atheists are left to fend for themselves.

It’s damn near slanderous to suggest Heap is suing because he wants to dismantle the chaplaincy, when the truth is that he genuinely wants to become a part of it.

But that’s what you get when you invite a guy to discuss Humanist Chaplaincy who doesn’t understand these issues. I find it hard to believe Fox producers couldn’t get Heap, another military atheist leader, a representative from the AHA, or, really, anyone else to discuss this matter… which leads me to assume they never bothered to look in the first place.

November 10, 2014
There's Nothing Wrong with Teaching About Islam in Public Schools
Next Post