Vladimir Putin is The Advocate‘s 2014 Person of the Year November 8, 2014 Camille Beredjick

Vladimir Putin is The Advocate‘s 2014 Person of the Year

The Advocate, the oldest LGBT magazine in the country, has announced that its 2014 Person of the Year is Vladimir Putin, the horrifically homophobic president of Russia and a committed opponent of all things pro-LGBT.

The yearly recognition is not necessarily meant to highlight someone who has made great strides for LGBT rights (an obvious fact, based on this year’s choice), but rather the person who has had the most profound influence on LGBT people in the previous year. Much like TIME magazine’s Person of the Year has, in the past, gone to anti-justice leaders (including Putin), sometimes the Person of the Year is a really, really influential bad guy. And Putin’s toxic, even deadly influence on LGBT people needs no explanation.

The magazine cover breaking the news even illustrates the Russian president as a new-age Adolf Hitler, with the help of some strategic headline placement: 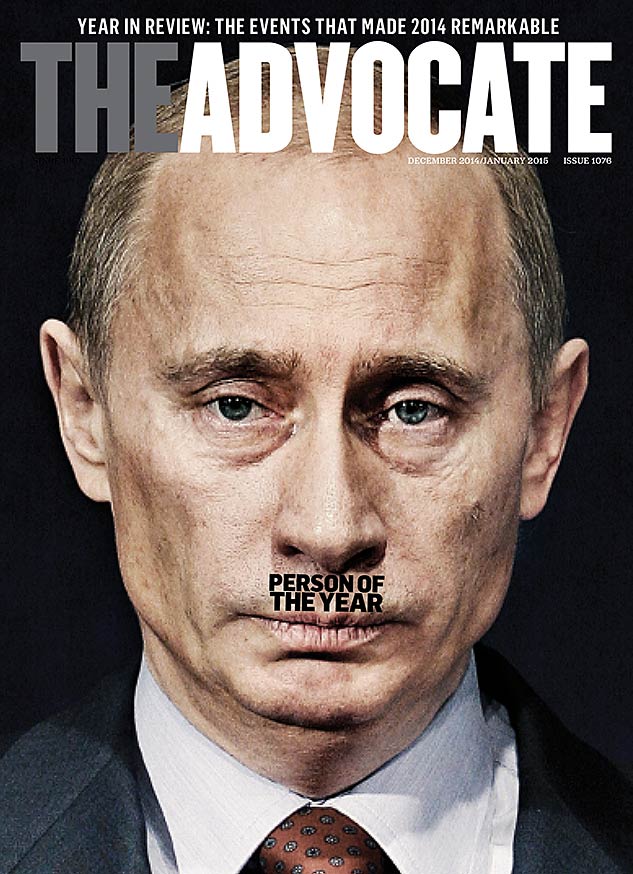 I wrote about the Person of the Year last year, when The Advocate gave the honor to Pope Francis for positive reasons. Shining a light on the Pope’s iconic “Who am I to judge?” comment and his vaguely pro-LGBT actions, The Advocate then said:

We named him Person of The Year because he has challenged both church leaders and parishioners to think about why they oppose LGBT rights, whether it’s worth the effort to do so when there are real problems the church must address, and whether being antigay is part of Christ’s teachings.

A year ago, I was highly critical of the magazine for calling Pope Francis, the leader of one of history’s most homophobic and transphobic institutions, a potential game-changer for LGBT people. I have some criticisms of their decision this year, too, but for different reasons.

“Imagine a boy who dreams of being a KGB officer when everyone else wants to be a cosmonaut.”

This quote appears early in The Man Without a Face, Masha Gessen’s 2012 biography of Vladimir Putin. It’s as succinct and illuminating a characterization of the Russian president as you’re likely to find. The KGB, after all, perfected the thuggery, espionage, and aimless bureaucracy that are hallmarks of Putin’s regime. The agency’s crackdown on dissidents offered a blueprint for Putin’s own strongman excesses. That he aspired to such a career as a child tells us something useful about his psychopathology: This is a man hardwired to intimidate.

Nowhere is this tendency more apparent than in his crusade against LGBT Russians. Since winning a third term in 2012, Putin has become ever more autocratic, and his antigay ideology ever more extreme. In June 2013, he signed the infamous antigay propaganda bill that criminalizes the “distribution of information… aimed at the formation among minors of nontraditional sexual attitudes,” with nontraditional meaning anything other than heterosexual. Individual violators are fined anywhere between $120 and $150, while NGOs and corporations can incur fines as high as $30,000. International outrage flared in the months before the Sochi Olympics, in response to which Putin reassured the gay and lesbian community they had nothing to fear as long as they left Russia’s children in peace.

Such incendiary rhetoric is a staple of Putin’s political playbook. And in Russia, where the majority of media are state-owned, there’s little public pushback. Tanya Cooper, a researcher with Human Rights Watch, argues that the average Russian is unlikely to seek diverse viewpoints. “When politicians, celebrities, and respectable journalists in Russia tell you repeatedly, either on television or in print, that gay people are perverts, sodomites, and pedophiles, you just believe it,” she says.

The magazine also rounded up nine honorable mentions for Person of the Year, all of them LGBT advocates, not opponents. Here’s a quick breakdown of who they are and what they’ve done:

Now that is a solid list of people who represent the year in (American) LGBT issues.

I think what bothers me so much about The Advocate‘s decision is that the voice of an anti-LGBT person is being held in higher regard than that of any pro-equality human on the planet. The nine finalists for this title are exceptional advocates for LGBT rights, many of them newly out and already bringing amazing visibility to the cause. By choosing Putin over any of those individuals — and over the thousands of other amazing LGBT activists who were not named finalists — Advocate editors are saying that the homophobic tirades of one twisted politician are more significant than the work any of our people are doing.

Hell, the Advocate could have pulled a true TIME and made a group of people or even a concept into its Person of the Year. Remember The Protester? The Endangered Earth? You? I would have loved to see the magazine honor the transgender women of color who made radical strides in visibility, acceptance, and justice this year; or maybe the plaintiffs challenging marriage equality bans in half the country; or the rainbow flags flown in places from Russia to Uganda to show LGBT people’s resilience in the face of deadly oppression.

None of that’s to downplay the significance of Putin’s harsh laws whatsoever. We’ve all heard how terrifyingly unsafe Russia is for LGBT people. Lives are on the line, and we need to be paying closer attention. That said, Russia is by far not the only country where LGBT people are persecuted, jailed, or even killed for being who they are, and we can’t let ourselves forget that just because those countries don’t appear in the news as often.

But this isn’t about which country treats its LGBT community the worst; it’s about where the greatest change is happening, good or bad. And I take serious issue with spotlighting one homophobe’s actions over the contributions of every single LGBT person in the world.

This decision by The Advocate says that not a single LGBT person — or ally, or group of LGBT people and allies — influenced LGBT communities this year more than Putin did. Maybe some people think that’s true, and maybe if we’re comparing the population of Russia to the number of Transparent viewers, it is. But if an LGBT magazine won’t uplift the achievements of queer people over those of straight homophobes, who will?

November 8, 2014
The Guardian Deleted the Spot-On, Polite Comment From the "Ex-Muslims of Britain" That We Published Yesterday
Next Post