It might sound like a Stephen Colbert “aging pundit tries to appeal to young viewers with cringe-worthy attempts to prove he gets them” skit, but it’s not.

The West Virginia Diocese of Wheeling-Charleston has a project with the edgy name of VCAT — Video Catechism — aimed at the young ‘uns. The goal is “to effectively reach this generation of teens with the richness and beauty of [the] Catholic faith.” Since teens “consume… a staggering” amount of media each day, much of it video, the messages are video-based.

If the name doesn’t win back the young, erstwhile Catholic demographic, the content is sure to make an impression. Content like one of the latest VCAT productions: a hip-hop video catechism called “Love God/Love Each Other” written by youth icon and Franciscan University Professor Bob Rice.

Explaining the purpose of this and other VCAT productions, he states

What we are doing with these 18 videos is show young people that the commandments of God actually set us free and don’t restrict us.

While that may be their intent, it seems like an overly optimistic goal considering the production in question. 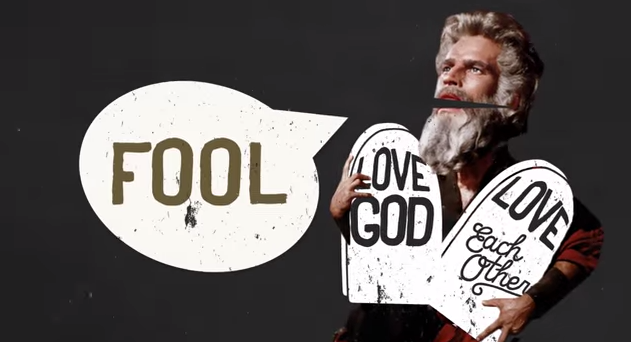 Like other forms of religious media, even when it lasts a short time (in this case, a mere two minutes and nineteen seconds), it feels like it goes on so much longer. This particular song owes the effect to the fact that it is a painful merging of mediocre ability, average visual production, and awkward phrases (am I the only one creeped out by the line about God being “your savior and your lover — lover of your soul?)… The emphasis on “love your neighbor” is laudable (the emphasis on loving “a god you can’t see” less so, but expected).

Otherwise, this is standard Christian media — with an attempt, as Director of Youth and Young Adult Ministry at Diocese of Wheeling-Charleston Bob Perron put it, to evoke an “urban feel.”

Colbert would be proud of them.

November 7, 2014
Ohio House Bill Would Undermine the Teaching of Evolution
Next Post