Watch This Conservative Pastor’s Mind Get Blown As He Discovers How Secular Scandinavia Is November 6, 2014 Hemant Mehta

Those of us in the U.S. think we’re amazing at everything… mostly because we’re blissfully ignorant about how the rest of the world operates.

That’s pretty much the basis for a fascinating documentary series called The Norden: They take Americans who are passionate about a certain issue, send them to Scandinavia, have them see how it’s done over there, and film their jaws dropping.

There’s the setup for this clip in which a conservative Southern pastor, Marty McLain, finds out how religion works in a mostly secular region:

There’s some culture shock for you: You mean there are places where no one cares about religion and the churches perform gay weddings? WHERE AM I?!

This other graphic is pretty telling, too, showing what percent of the population in different countries takes religion seriously: 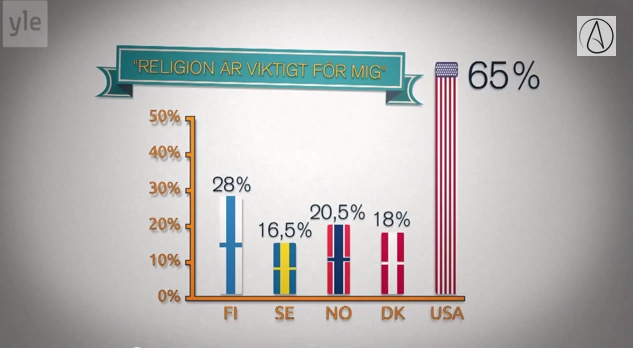 Alright, who wants to go to Scandinavia? That might as well have been a tourism ad, because I’m convinced I need to visit.

(***Edit***: I thought this all took place in Norway when this post initially went up; I’m told it takes place in Sweden and Denmark. My apologies.)

November 6, 2014 Humanist Chaplain Jason Heap Files Federal Lawsuit Against U.S. Navy After They Reject His Application
Browse Our Archives
What Are Your Thoughts?leave a comment