Earlier this week, the Humboldt County Board of Supervisors (in California) scheduled a vote to display the phrase “In God We Trust” in the county chambers. The proposal was introduced by Supervisor Rex Bohn (below): 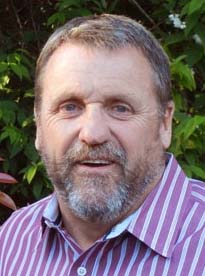 But as soon as the proposal was introduced, they were warned that a lawsuit would be forthcoming if they followed through with their plans. Atheist Carole Beaton and attorney Peter Martin, who put a stop to city-sponsored prayer breakfasts in the city of Eureka a couple of months ago, warned the supervisors they would be paying close attention to the vote:

In a letter sent to the board [Monday] morning, Martin suggested that Bohn is trying to “inject religion into county government” and thereby running “the risk of an expensive and divisive civil lawsuit against the County.”

The challenge worked! By Monday afternoon, Bohn said he would withdraw his proposal:

Bohn said he decided to abandon the resolution proposal due to the controversy as well as the potential expense of a legal challenge. “We have big fish to fry and we’re dealing with all these minnows,” he said.

Regardless, Bohn said he’ll keep the motto in mind personally. “I’ll change it to ‘In God I trust,’” he joked.

That’s precisely the point, isn’t it? You believe in God; we don’t. So stop putting up signs suggesting your beliefs represent everyone else’s.

November 6, 2014
More Than 20 Years Later, a Jesus Fish Symbol is Covered Up on a War Memorial in Missouri
Next Post