Counties That Adopt “In God We Trust” Resolutions Are “Poor, Uneducated, and Overwhelmingly White”

In God We Trust ~ America, Inc. is the organization dedicated to putting up religious plaques all around the country .

It turns out they’ve done quite well: Nearly 400 cities and counties have approved their sample resolution, putting up “In God We Trust” signs in government buildings.

Hank Sims, writing for the Lost Coast Outpost, decided to analyze the 77 counties (rather than cities, presumably so there’s no overlap) that have adopted the resolution to discover what they have in common. Turns out God’s Country, his name for the collection of 77 counties, leaves a lot to be desired:

The kind of county that adopts this resolution is poor, uneducated and overwhelmingly white.

Here’s just one example of what he found: 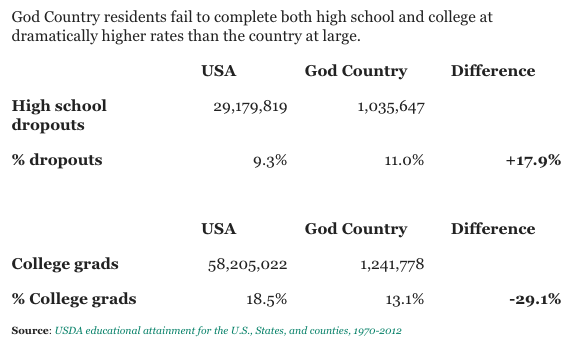 What conclusions can we draw from that?

Not very much, unfortunately. If anything, it just complements what we’ve known for a while: there’s a correlation between education levels, wealth, diversity, and religiosity.

So “In God We Trust” resolutions are passed in more religious areas… surprise!

It also suggests, though, that we need to pay special attention to these local governments because they’re the ones most likely to pass resolutions that enshrine religion into law. It’s that attention that led to an IGWT resolution being rescinded in Humboldt, California this week.

November 6, 2014
After Two Years, Lake Elsinore Will Finally Unveil a Veterans Memorial, This Time Without Religious References
Next Post

November 6, 2014 Mississippi Group Wants to Establish Christianity as the State Religion
Browse Our Archives
What Are Your Thoughts?leave a comment