Brittany Maynard, the 29-year-old woman whose growing brain tumor made her death inevitable, has taken her own life, just as she announced she would. In the past few months, she became an eloquent voice for the death-with-dignity movement. Our own Rachel Ford documented Maynard’s struggle here, including the part where Christians like Matt Walsh get to strongly imply that the California woman is a coward.

Maynard’s last words to the world appeared on her Facebook page:

Here, also from Facebook, are some thoughtful reactions to Maynard’s decision. 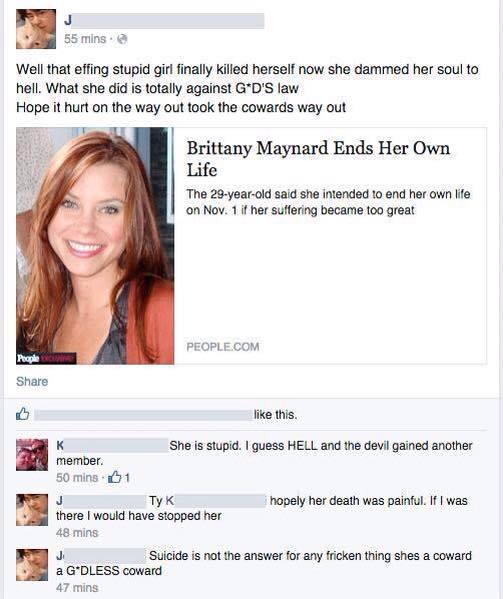 Then there are the fine folks over at Free Republic:

For starters is she even a Christian? If not God won’t forgive her even if she dies a “natural” death.

I can see Satan smiling.

And (responding to the fact that Maynard chose to die a day later than she’d originally announced):

She’s either a quitter or a procrastinator. I despise both.

Wow. If that’s Christian love, you can keep it.

P.S.: The Vatican also felt obligated to sternly lecture everyone about Maynard’s self-directed death, calling it “an absurdity” and “reprehensible.” Monsignor Ignacio Carrasco de Paula, the head of the Pontifical Academy for Life, sounds like Miss Teen South Carolina:

“Suicide is not a good thing. It is a bad thing because it is saying no to life and to everything it means with respect to our mission in the world and toward those around us.”

P.P.S.: To advance the death-with-dignity cause, you can donate to the Brittany Maynard Fund here.