Russell Brand: Richard Dawkins Is a Proponent of “Atheistic Tyranny” For Rejecting the Supernatural

Last year, the comedy actor and activist Russell Brand did an eleven-minute interview with BBC Newsnight’s Jeremy Paxman that was a bit of Rorschach test of one’s political sensibilities. Brand had full-scale political revolution on the brain, and he talked less than coherently on the matter, clearly exasperating the more practical (and more jaded) Paxman.

Scores of moderate and right-leaning pundits found Brand confounding and lacking in intellectual heft. Many on the left, however, thought the interview was a thrilling example of someone finally speaking truth to power, possibly heralding a beautiful dawning of the Age of Anti-Capitalism.

The excitement transcended national borders, with the YouTube clip

… being passed hand to virtual hand among Scandinavian intellectuals like a samizdat copy of Solzhenitsyn behind the iron curtain,

… in the memorable phrasing of David Runciman. 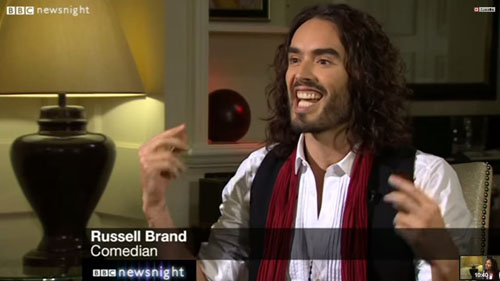 Pleased by the reverberations (and never one to underestimate his capabilities as a Buddhist pop philosopher), Brand decided to write a book on how we ought to overturn the old strictures and structures. It just came out (title — what else? — Revolution) and it reads a bit like Karl Marx Marries the Dalai Lama — for Dummies.

New atheists come in for a special drubbing, foreshadowed by the author approvingly quoting a Christian prayer (including the line “it is by dying that one awakens to eternal life”) on the first page of his grand manifesto.

Writes Nick Cohen at the Guardian:

The greatest villain of Revolution is not a super-rich financier but Richard Dawkins. Brand denounces him as a “menopausal” proponent of “atheistic tyranny” because Dawkins denies the existence of the supernatural. He pulls a succession of shabby tricks to bolster his claim that religion does not authorize oppression. Anyone who claims that Jesus, Allah, Krishna or the fountainhead of any other religion endorses homophobia instead of the “union of all mankind” is “on a massive blag,” [Brand] says.

That’s Britspeak for hoaxing or deceiving someone. But who’s deceiving whom? As Cohen rightly points out,

Brand has to ignore Leviticus’s edict that the punishment for men who sleep with other men is death, St. Paul’s hysterics about lesbianism, and the hadiths that have Muhammad saying that the punishment for sodomy is death by stoning. In other words, he has to ignore several millennia of real and continuing religious repression, so he can make his spiritualism sound emancipatory rather than cranky.

I like plenty of thespians (Brand included, actually), and I assume that there’s nothing inherent in their mental makeup that necessarily makes them depthless featherweights rather than great minds producing brilliant ideas, and oratory to match. And yet, I can’t think of a single actor whose dabblings in politics have ever wowed me.

That feeling is even stronger when it comes to a man who, like Brand, drifts airily between orientalist faiths (he was a Hare Krishna, then a Hindu, before settling on Buddhism, for now), the way a half-sated child might wander through a candy shop, imagining the next flavor.

Brand’s attraction to spirituality came years ago, as these things do, when he encountered a self-styled swami in Soho Square.

Russell looked into the swami’s eye and the world dissolved, and he became aware that everything is connected, atomically, and it’s ludicrous to imagine we are separate from anything, when we are all just vibrations.

With a skeptic’s blackened soul, I can’t help but picture Brand, dressed in a limited-edition Che Guevara T-shirt and a Commes des Garçons scarf, being limo-driven from his London townhouse to yet another political demonstration where photo ops and book-flogging chances abound.

I’m sure he means well. Let’s leave it at that.

P.S.:  An excerpt from Russell Brand’s Revolution is here. If you’re more in the mood for a pretty hilarious digest-cum-evisceration of the man’s tome, step right this way.

November 2, 2014
What's Weirder? Religious Leaders Who Don't Believe in God or Atheists Who Do?
Next Post