Florida Judge Who Ran a Christian Ministry from the Courthouse Is Finally Kicked Out of Office November 1, 2014 Hemant Mehta

Judith Hawkins (below) was a county judge in Tallahassee, Florida who didn’t seem to care much about the law. That would explain why she used her government position to advance her religious ministry. 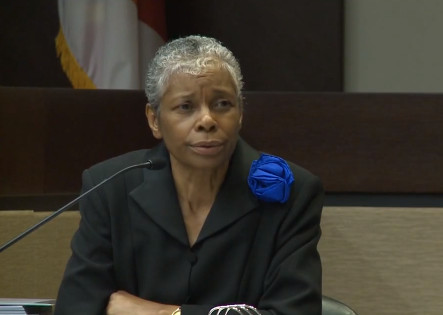 Hawkins is the founder of Gaza Road Ministries and she ran the company from the Leon County Courthouse. She also attempted to sell her ministry’s books to lawyers appearing in front of her. And it just got worse from there:

[Judicial Qualifications Commission] Hearing Panel Chair James A. Ruth wrote Hawkins was guilty of deleting subpoenaed financial records or her ministry, misleading investigators during depositions and refusing to turn over material without an official order.

The JQC also found Hawkins guilty of posting images of her wearing judicial robes on her ministry website, failing to comply with tax law, reading magazines during court proceedings and using less than her full time for judicial duties.

She also had her judicial assistant help her run the ministry but never reported that to taxing authorities. And check out this exchange:

On November 10, 2011, during a hearing in open court, an attorney appearing before Judge Hawkins mentioned, “Judge, I hear you have a new book out,” and requested an autographed copy… He heard about the book from one of the bailiffs… The judge, who was still on the bench, requested $15 dollars, told the attorney to pay her personally, and said “I’ll take it right now.”… The attorney offered, and Judge Hawkins accepted, an additional $5 more for her autograph… Judge Hawkins thanked the lawyer, said “I like your spirit” and asked him to “spread it amongst the others” because “[t]hese work for the State. I’m going to let you take the private Bar crowd.”

These allegations first came to light in December of 2012 and the case has been ongoing ever since.

In June, the Florida Supreme Court decided that Hawkins could no longer be a judge. The JQC had suggested she be suspended for 90 days and fined $17,000, but the justices had the option of taking it even further:

On Monday, six justices of the Supreme Court — Justice Peggy Quince recused herself — said it considered the entire case and requires she “show cause why removal from office is not the appropriate sanction in this case.”

On Thursday, the justices did indeed go that next major step, stating that Hawkins had no business being a judge anymore in a 36-page opinion:

“We conclude that Judge Hawkins’ conduct is fundamentally inconsistent with the responsibilities of judicial office, demonstrating present unfitness to hold office, and that removal is the only appropriate sanction… Based on the violations found by the Hearing Panel, which were supported by clear and convincing evidence, we conclude removal from the bench is the only appropriate sanction in this case.“

Hawkins has about two weeks to file for a rehearing… but it’s hard to see how she can defend herself at this point.

Finally, there’s some justice in this matter.

(Thanks to Richard for the link. Large portions of this article were published earlier)

November 1, 2014
Creationists Set to Make Monkeys of Themselves at Michigan State University Today
Next Post