Students at Michigan State University are in for a real treat today: a Creationist conference called the Origin Summit! The event’s website is really quite informative, as it gives students a great preview of what’s in store for them. I’m tempted to let this actual screen capture from their site do the talking, as it pretty much sums up what you can expect:

I know, you’re already burning your science textbooks, having been swayed by such wit and reasoning. But, really, there’s so much more goodness to be had that it seems a shame not to mention at least a few more shining moments.

There is, for instance, the morning workshop with Dr. Jerry Bergman. First point of interest? Creation Wiki has this to say of Bergman’s Ph.D.:

In 1992 he received a Ph.D. in human biology, from Columbia Pacific University, San Rafael, California. The degree is legal, but the university faced various accusations and had its accreditation removed in 1997. Some feel that the school’s support of Intelligent Design in required readings may have been involved. Others believe that their support of various alternative medical treatments was a factor. The real reason is unknown.

That a favorable description of a key speaker even has to mention that his “degree is legal” might cause concern for some, but obviously not all. The topic itself is surely worth a mention, if only for the shades of Godwin’s Law:

There’s no doubt Adolph Hitler believed in evolution, but to what extent did that belief affect his actions? You might say he caught the “survival of the fittest” ball and ran with it, declaring the Aryan race to be “the fittest”.

There are, of course, plenty of other fascinating talks, like “The Big Bang is FAKE,” as well as an iPad contest serving as a desperate bribe an inducement to attend (“Must be present to win”). The event that promises to be the most fun, though, is the “debate.”

The dictionary defines debate in this context as

a regulated discussion of a proposition between two matched sides

Which isn’t exactly how the Creationists of Origin Summit mean “debate.” Rather, they define it this way (again, an actual screen shot from their site): 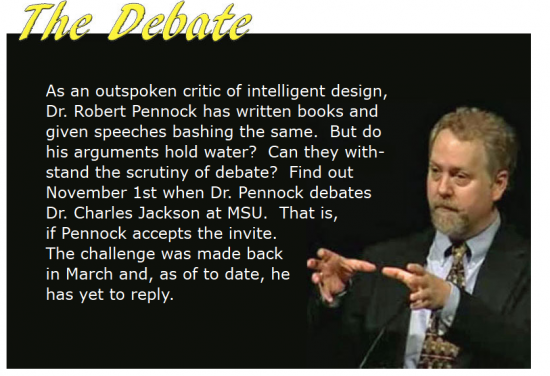 Best part? They even included time for this debate-sans-debater in their schedule:

Am I catching a whiff of Eau de Desperation in the air?

November 1, 2014
Bill Maher Speaks About the Berkeley Controversy, Then Gets Berated by Panelist for His Comments About Islam
Next Post

November 1, 2014 Florida Judge Who Ran a Christian Ministry from the Courthouse Is Finally Kicked Out of Office
Browse Our Archives
What Are Your Thoughts?leave a comment