Chad, the young atheist who has flummoxed a number of Christian debaters, has done it again.

The eighth grader asked Christian debater Dennis Marcellino whether he believed the Bible was literally true.

Marcellino said he did.

Chad followed that up by questioning Marcellino’s claim from earlier in the debate that Hell wasn’t really forever — doesn’t the Bible say it is? 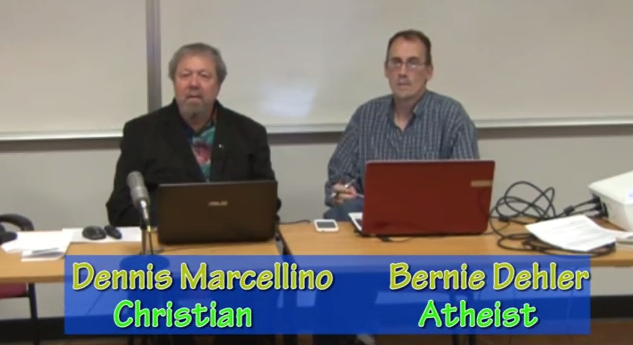 Chad: … you said it was all literally true.

Got that, everyone? The Bible is literally true. But not when you read it in English. The translators did a great job, but they royally fucked up all the sections about Hell…

In short, Marcellino basically responds by saying that words like “eternal” and “forever” are just synonyms for “a long time.”

Just for the sake of argument, here are some verses about Hell from the Bible:

“… just as Sodom and Gomorrah and the surrounding cities, which likewise indulged in sexual immorality and pursued unnatural desire, serve as an example by undergoing a punishment of eternal fire” (Jude 7)

“These are hidden reefs at your love feasts, as they feast with you without fear, shepherds feeding themselves; waterless clouds, swept along by winds; fruitless trees in late autumn, twice dead, uprooted; wild waves of the sea, casting up the foam of their own shame; wandering stars, for whom the gloom of utter darkness has been reserved forever” (Jude 12-13)

But, you know, that’s English. The Bible doesn’t count in English.

Nice job getting him to admit that, Chad!