This Arizona News Station Found Only One Pastor Willing to Appear on TV to Speak Out Against Marriage Equality… October 31, 2014 Hemant Mehta

A local ABC reporter in Arizona was asking locals what they thought about gay marriage recently… and she found a couple people who just shrugged it off like it was no big deal, which is the right reaction.

Most pastors, who oppose marriage equality, refused to go on camera. (Were they ashamed? Because they should be.)

But the reporter found one pastor willing to talk to her.

Take a guess… Then watch: 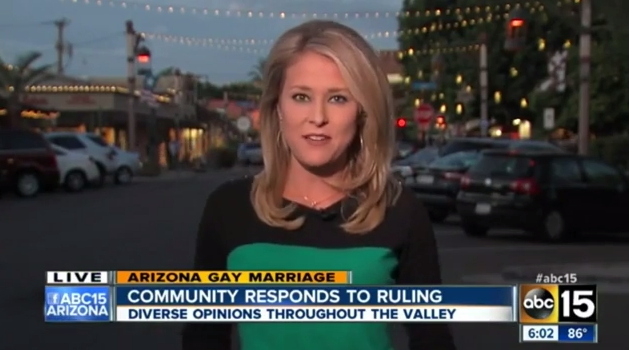 I’m totally against it. I think homosexuality is disgusting.

In Pastor Steven Anderson‘s view, civil rights should be decided by majority vote.

You have to love, though, how, because all those other pastors refused to speak on the record, Anderson represents the anti-gay marriage side. You have two people off the street who support it… and one bigoted pastor who’s afraid of getting gay cooties. It just goes to show how there really are no good arguments to oppose it; only irrational fear and pure bigotry.