Remember last week when a parent flipped out because his son was learning about Islam in history class?

This time, Kevin Wood, a former Marine, was furious because his daughter was being educated about Islam at La Plata High School in Maryland. And how dare she learn about what more than a billion people believe?! 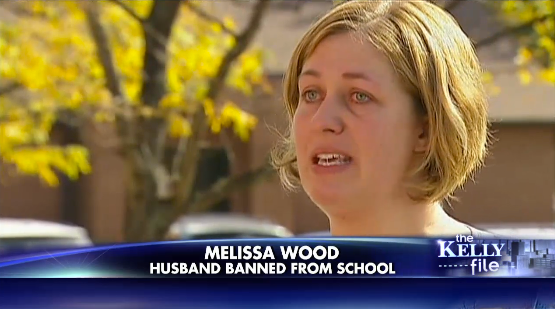 “It’s not a religion my husband believes in,” Kevin’s wife, Melissa, tells Yahoo Parenting. “My husband’s issues, and mine too, are that they’re teaching Islam, but they are not teaching the current events on Islam. They are making Islam sound like [its followers] are peaceful people.… He is not saying all Muslims are bad.”

It sounds more like the school is teaching the basic tenets of Islam so that students have a working knowledge of the faith. I’m also guessing the school does the same thing with Protestantism, Catholicism, Judaism, and a couple of Eastern religions, too.

To make matters worse, Wood threatened the school after learning that his daughter wouldn’t be given an alternative assignment. His wife explains:

“He said, ‘I will bring down a sh*t storm on the school. I’m contacting the media, the newspaper, and contacting an attorney.’ He did not say he would come to the school and create a disruption.”

Regardless, the school issued a no-trespass order against him, just to be safe, probably poking the monster even more.

I said this before, but I have to say it again: This school is not preaching Islam. No one is trying to create converts. They’re teaching about the faith so students can get a better understanding of how certain parts of the world have been shaped by Islam and how the faith impacts current events. It’d be crazy not to give students this information.

And how bad do you feel for this guy’s daughter? Her ignorant parents are essentially forcing her to leave the classroom during this unit so she doesn’t learn about a really important topic. As if they can shield her from that knowledge forever. As if they’re doing her a favor.

I don’t know if her personal views align with her parents, but I hope she gets through this debacle with her own dignity intact.

October 31, 2014
I Owe an Apology to the Freedom From Atheism Foundation, Though They're Not Completely Off the Hook
Next Post

October 31, 2014 The Force Grows Stronger: BBC Says That 2,000 People in the U.K. Are Serious Followers of "Jediism"
Browse Our Archives
What Are Your Thoughts?leave a comment