Survey Shows We’re All Wrong About the Relative Percentages of Muslims and Christians in Our Countries October 30, 2014 Hemant Mehta

What percent of people in the U.S. are Muslims?

The answers are 1% and 78%, respectively. A new survey released by the Ipsos Mori social research institute shows that not only did we not know that, we weren’t even close. 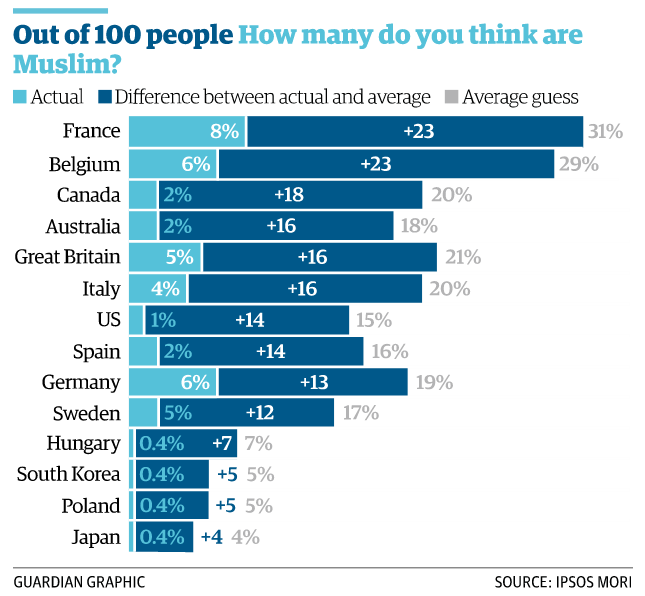 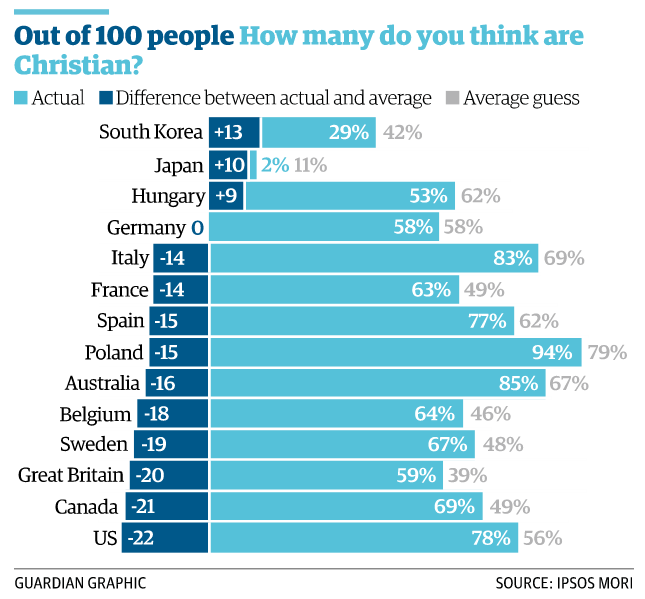 There were several other questions, too, and The Guardian has those results. When the 14 countries surveyed were ranked according to most accurate (least ignorant) overall, the U.S. came in 13th. So… umm… we’re not last! WOO!

But this has some political consequences, too, because perception matters far more than the facts. There’s a reason Christians feel under attack, even though they’re safely in the majority, and they’ll vote accordingly. There’s no threat of Sharia Law coming to the U.S., but try explaining that to someone on the far Right. When you think immigrants represent a third of the country when they’re really only 13% of it, you’re going to want tighter restrictions on immigration policies. Politicians know all this and they just play on those fears.

While this survey doesn’t touch on it, I’ve seen similar discrepancies when it comes to Creationism. People think Young Earth Creationists are just a fringe minority in the U.S. when they actually constitute a mind-blowing 42% of the population. That’s why people like Ken Ham deserve our attention. He doesn’t represent a small handful of willfully ignorant people. He represents a metric fuckton of them.

This is why it’s so important for skeptics to bring these numbers to the table. Most people are unaware of the reality of the situation and our leaders, who should know better, are horrible at correcting those perceptions.