I Threw a Bible-Based Halloween Party and Here’s How It Went October 29, 2014 Tracey

I was gearing up for Halloween when I came across The UN-Halloween Book at a used bookstore. It assured me I could still enjoy this time of year without “honoring the evil in the world.”

This alternative to Halloween wanted to replace “witch craft, demons, and trick-or-treating” — which I always considered harmless cultural rituals — for safe, clean, Bible-based fun. Feeling concerned about my past glorification of the dark side, I decided to renounce my typical Reese’s Cup sacrifice for a night of faith-based lessons, purity, and plagues! 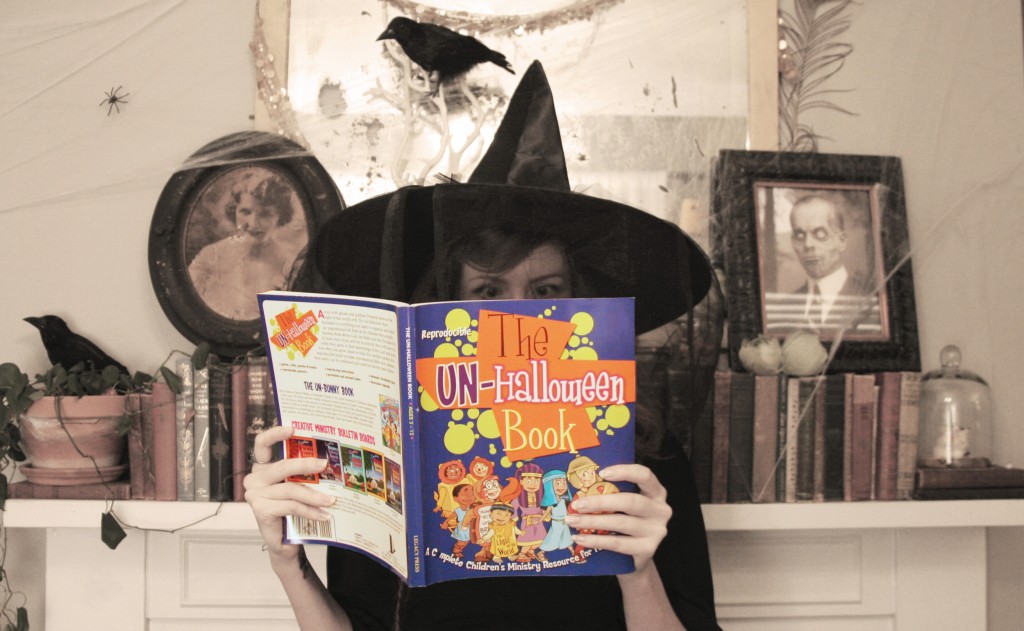 Sadly, all of my friends suddenly came down with various illnesses the night of the party and were unable to attend. Or so they told me.

Here’s what they missed:

I ditched my ghoulish costume and browsed the book’s suggestions: a slice of bread, a candle, a generic “Bible character,” and a plagued Pharaoh. I was leaning toward being bread… although I was slightly disappointed there wasn’t a “sexy bread” option for the ladies. 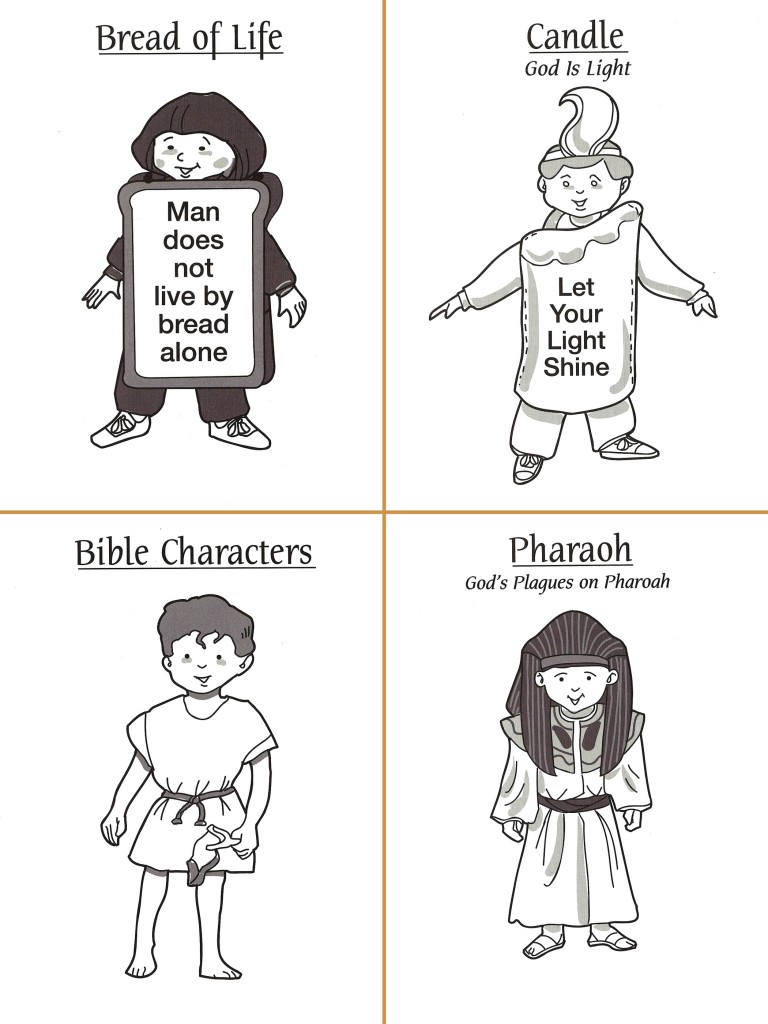 Then it was time to make some Savior Snacks. The book suggested I sell them to the attendants, but like I said, nobody showed up to buy. (I dialed a prayer to the Big Man upstairs, apologized for the lack of a financial offering, and requested he help me recoup the $23 I spent.)

That money was first spent doubling up on Jesus’ “Shining Candle” endowment to keep my spirit extra warm on this lonely night: 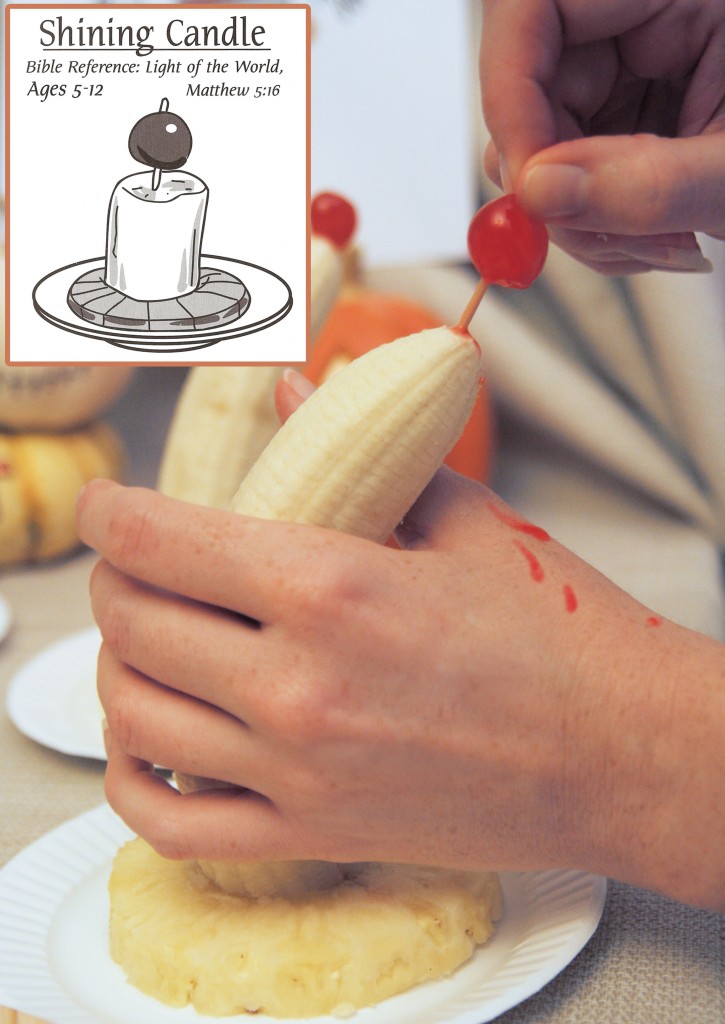 Ironically, it was nearly impossible to get the cheesy Wall of Jericho to stay standing. 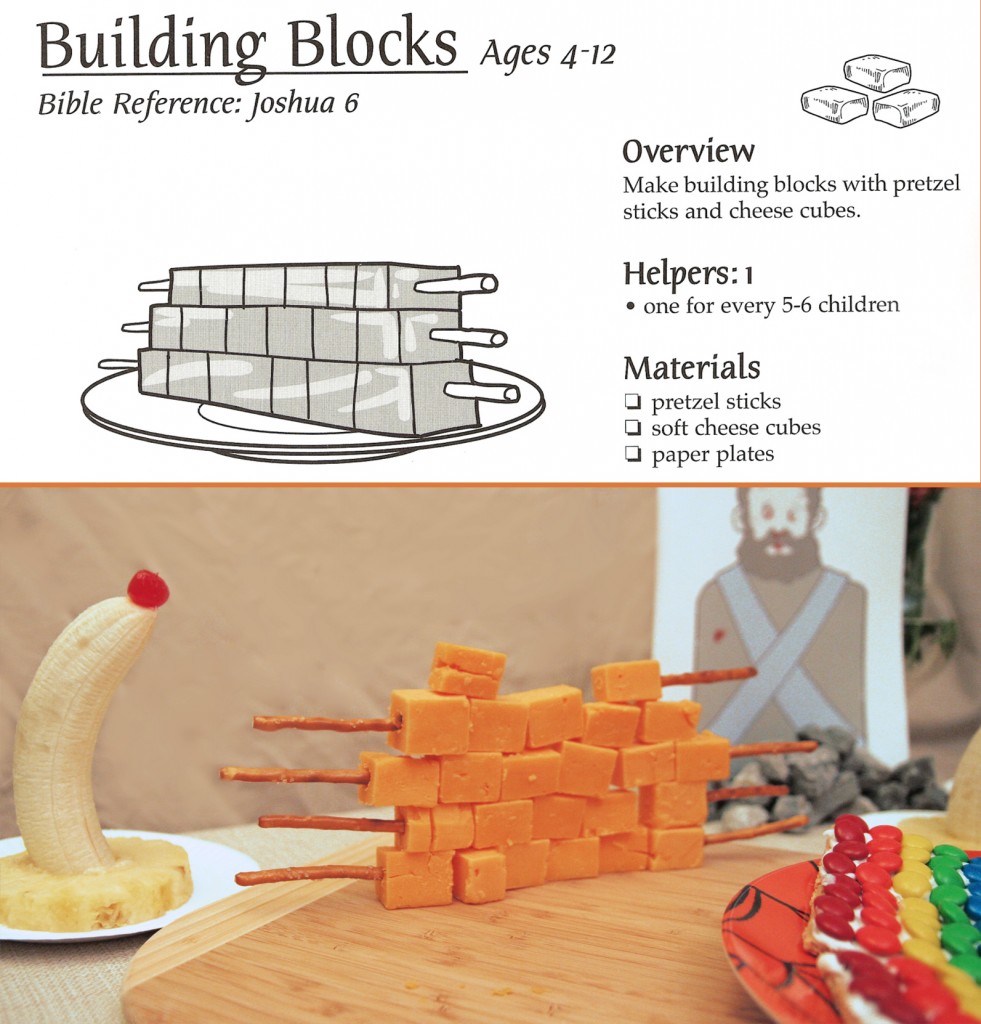 Finished with the food, it was time for the games!

First up: Pin the bandage on the Good Samaritan — which I suggest not doing blindfolded if you really want to repair that jugular injury… 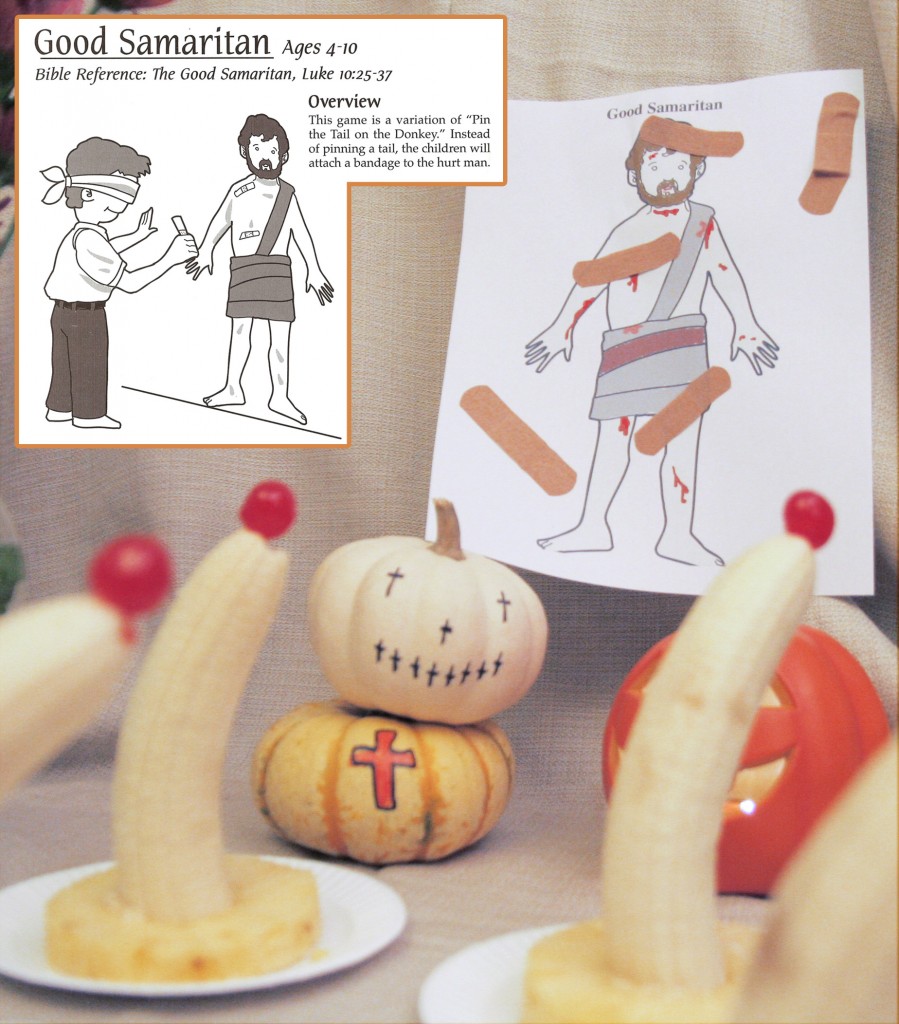 Next: Stoning Goliath! Though, after giving medical attention to the last guy, I was feeling conflicted about joyfully handing the next fellow a brutal, agonizing death: 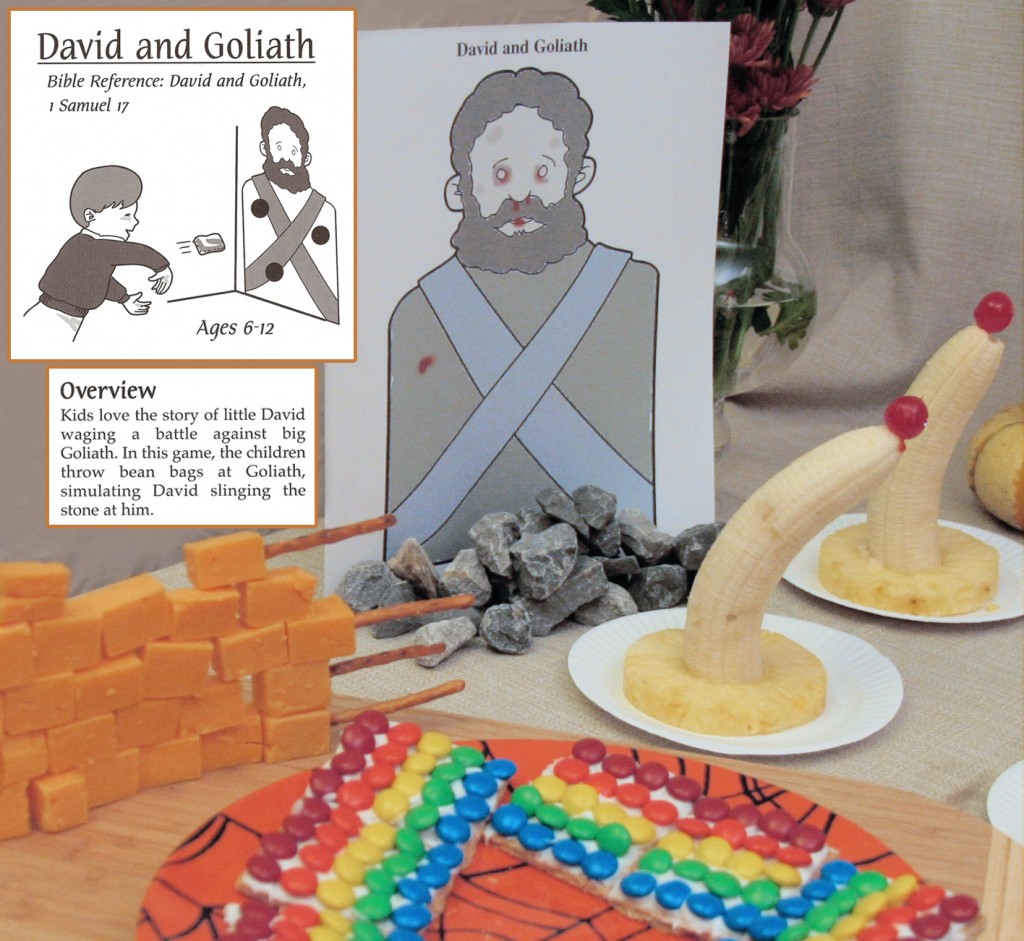 Next: Throwing plagues at the Egyptians! Smiting folks with God’s backing is exhilarating if you’re a master level sociopath. And the book came equipped with patterns I could cut out and use, including diseased livestock, boils, lice, and a dead baby.

All I really learned from playing this game is how dated the Bible is based on the Bronze Age fears. They could stay relevant by swapping out the frogs and locusts for Ebola and GMOs: 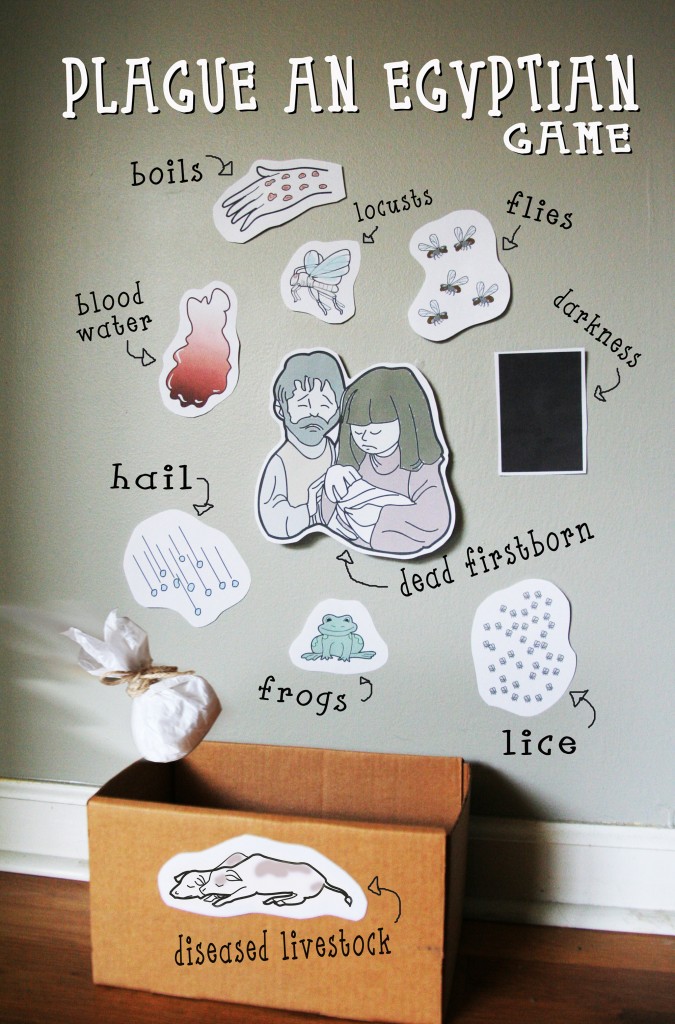 After becoming a “Ten Plagues” scholar, I aced the crossword on the same topic. The recommended age for this activity is 8-12 years old, which is really the perfect age for children to be learning about blood, boils, and dead babies. Also, 1 Across was very tricky. 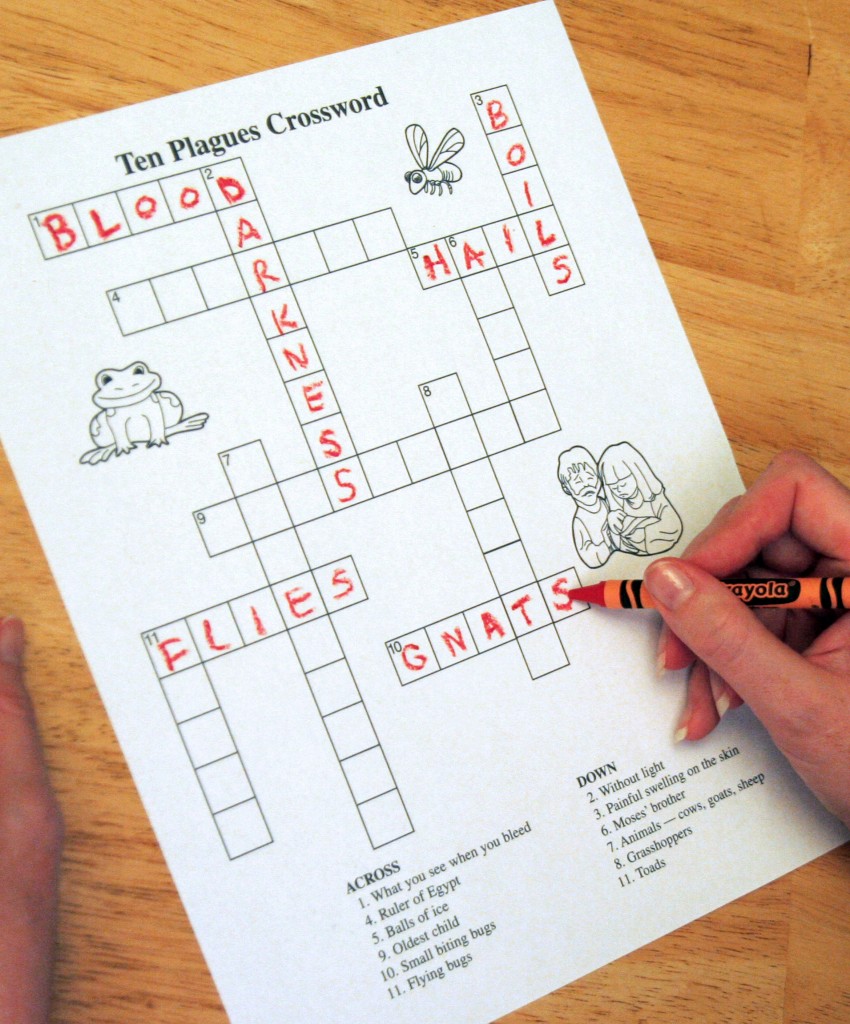 By the end of my UN-Halloween celebration, I felt like my own appreciation for horror and spooks was far surpassed by the dark fetishes of Christian children.

I tried to block the imagery of festering boils and the Good Samaritan’s spurting neck wounds out of my mind long enough to devour $23 worth of cheese bricks, rainbow crackers, and Jesus bananas. What can I say? I wanted to get my money’s worth. And God wasn’t responding to my requests for a refund. 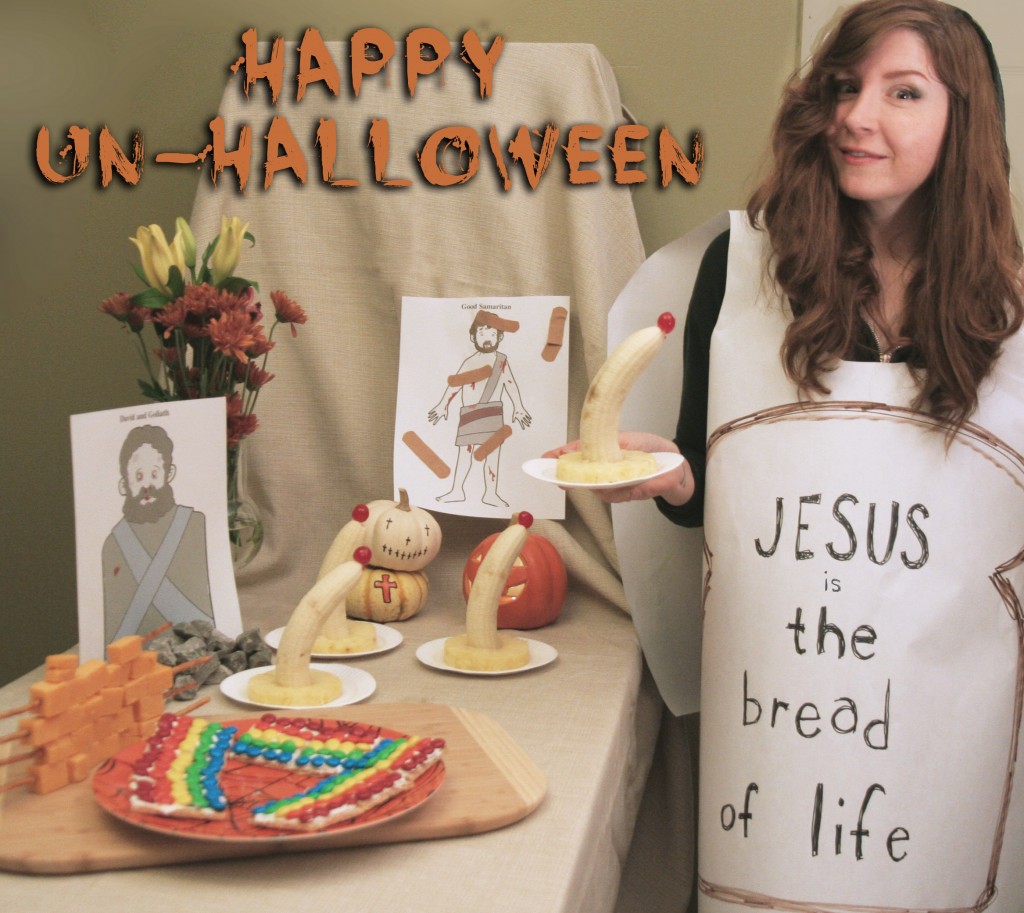 Next year, you’ll all join me, won’t you?

October 29, 2014
Houston Mayor, Under Pressure from Christians, Rescinds Subpoenas of Pastors
Next Post

October 29, 2014 Alabama County Commission Gives $3,000 Grant to Support Baptist Ministry for Men
Browse Our Archives
What Are Your Thoughts?leave a comment