What happens when church politics intersects with actual politics? One Albuquerque, New Mexico church may soon find out.

Parishioners of Legacy Church recently went public with sample ballots given to them by the church — ballots that included a handful of highlighted names. 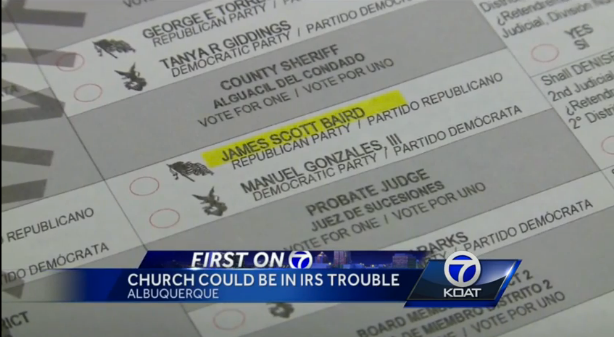 … marking a sample ballot is legal, [but] federal officials said a nonprofit is not supposed to take sides in a political election.

This is because IRS rules prohibit churches and other nonprofits from endorsing candidates. While one can imagine a scenario where a nonprofit might mark sample ballots in a fashion that does not endorse specific candidates — for example, by randomly marking ballots such that every sample ballot endorses a different set of candidates — Legacy Church seems to have had no intention of being impartial. Nor does it seem that they were overly troubled to pretend otherwise.

On the contrary, the ballots churchgoers received endorsed the same set of candidates — including a fellow congregant, James Scott Baird, candidate for Bernalillo County sheriff.

It appears they were participating in Pulpit Freedom Sunday, a stunt in which pastors endorse candidates specifically to draw the attention to the IRS in the hopes that, if the IRS revokes their non-profit status, they could sue the government to try and get the whole “churches can’t endorse candidates” rule overturned.

Their brazenness probably stems from the fact that this not the first time the church has gotten mixed up in politics — and not even the first time it’s had a say in the sheriff’s race. Indeed,

A falling out between Sheriff Houston and Pastor Smothermon, however, put an end to that support: Houston is no longer a member of Legacy Church, and the pastor’s sample ballots were marked for his opponent.

This time, Smothermon’s political activity seems to have raised enough attention that something might be done. As KAOT notes

If the IRS finds the church was in the wrong, it could lose its tax-exempt status and even have to pay back any money spent on marking up the ballots.

That, of course, remains to be seen.

October 28, 2014
Christian Bale, Who Plays Moses in Exodus: Gods and Kings, Calls His Character "Barbaric" and "Schizophrenic"
Next Post