On The Good Wife, an Atheist Running for Political Office Tries to Shy Away from the Label October 27, 2014 Hemant Mehta

On The Good Wife, an Atheist Running for Political Office Tries to Shy Away from the Label

That’s coming back to bite her in the ass now that she’s running for State’s Attorney. On last night’s episode, her campaign manager, who knows how much atheism is a political liability, urged her to walk it back… it led to some all-too-real conversations about the difficulties of being openly non-theistic while running for public office.

Two scenes in particular stood out: One, when Florrick was trying to prepare for an interview with a popular pastor and asked her (religious) daughter Grace for advice on what to do:

Grace: Are you gonna say that you believe in God?

Grace: Are you gonna say that you’re an atheist?

Grace: What are you gonna say?

Alicia: I don’t know. That I think I’m struggling with it?

Grace: [Laughs] Need some help with that?

Grace: Then what’s the struggle?

The second scene was the actual interview. Turns out the ambiguity of her answers did her wonders: 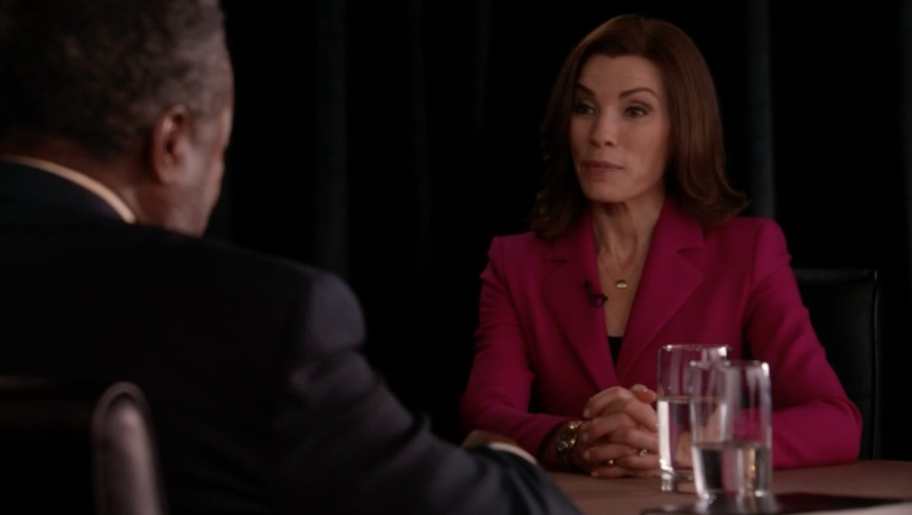 Pastor Jeremiah: Why do you say uh-oh?

Alicia: I think you’re preparing to pull a quote from my past…?

Pastor Jeremiah: Well, [as] a matter of fact, two years ago, you went on the record and declared that you were an atheist. Now, do you still believe that?

Alicia: Do I believe that I’m an atheist?

Pastor Jeremiah: Well, you were quite insistent at the time…

Alicia: [Laughs] That sounds like me. My life has gone through a lot of changes over the years.

Alicia: Yes, and everything. If you had asked me six years ago where I would be today, it would not be running for State’s Attorney.

Alicia: It is that. And with each passing month, I find my dogmatism decreasing.

Pastor Jeremiah: So you’re not not an atheist?

Pastor Jeremiah: … to people who talk about God?

Alicia: Yes. Recently, I have looked for answers outside of myself.

It’s a lot of circling around the truth to make herself more acceptable to the public — and it worked. The reaction to her interview was pretty positive, though as the episode progressed, you could sense that this wasn’t the last time her religious beliefs would be brought up.

Alex Kritselis at Bustle writes about how Florrick is trying her best to be honest about her beliefs… but not completely honest:

… Being honest about her atheism might not be a “smart” political move, but in some ways, Alicia really is “St. Alicia” — she’s just not comfortable lying about this sort of thing. Well, not yet, anyway. Maybe that will change if she ends up winning the election and spends a couple of years immersed in the corrupt Chicago political scene…

Scripted television or not, it’s nice to see a character who admits to being an atheist and knows damn well she’s not going to “find God” anytime soon. Though I wish she didn’t equate atheism with dogmatism in her interview, it wasn’t exactly unexpected. It’d be fascinating to see her character get elected as a prelude to her coming clean about what she really thinks about faith.

October 27, 2014
Lay Off on the Sikh Student Allowed to Bring a Knife Into His School
Next Post

October 27, 2014 Christian Files Open Records Request for Strippers' Names and Addresses... So He Can Pray for Them
Browse Our Archives
What Are Your Thoughts?leave a comment