Atheist Groups Are Not Distributing “X-Rated” Pamphlets to Students, No Matter What Breitbart Tells You October 27, 2014 Hemant Mehta

Atheist Groups Are Not Distributing “X-Rated” Pamphlets to Students, No Matter What Breitbart Tells You

I’ve seen a number of articles on conservative websites over the past few days claiming, in the case of Breitbart, “Atheist Group To Distribute Pamphlets in Schools of Cartoon Bible Sexually Assaulting Woman.” It stems from an article on CNSNews.com. 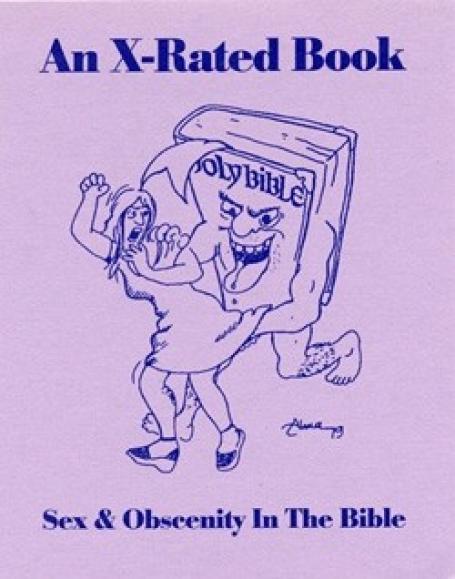 Since those sites won’t bother to do any research, since none of this is news, let me help you out.

The story is old. Really old.

Here’s the backstory: In 2013, World Changers of Florida, Inc. held Bible distributions at a number of public high schools in Orange County, Florida. No student would be forced to take one, but there would be a table set up where interested students could take a copy if they wanted.

This alone could have been illegal, but the Orange County School Board agreed that non-Christian groups could also run a distribution if they wanted. The Central Florida Freethought Community (CFFC) called their bluff and planned their own giveaways.

But the books they chose to distribute, including An X-Rated Book (above), were heavily censored. The book that’s the source of the current controversy was one of the books prohibited from being given away (perhaps for obvious reasons):

The Freedom From Religion Foundation filed a federal lawsuit against the district because, they claimed, the censorship went too far. But before a judgment could be reached, the district said the FFRF’s materials could be distributed. (FFRF maintains that they would rather all distributions be stopped altogether.)

Even the Satanic Temple joined in the fun after the door was opened, saying they wanted to distribute a coloring book to students.

The point of the whole story is this: The “X-rated” pamphlet was initially included in the mix of books precisely because atheists wanted to provoke school officials. After all the legal back-and-forth, they were given the opportunity to include it in their distribution. But they haven’t take advantage of that. Not yet. (And my guess is they probably won’t.)

There’s another question we should ask: Is the cover of this pamphlet disturbing? Absolutely. And we can have a separate conversation about whether the image does more harm to FFRF or people’s perceptions of the Bible.

Though I would add if you think the cover image is more of a problem than what the Bible says about women (and how that plays out in real life), you should probably reevaluate your priorities.

In any case, no atheist group has distributed that pamphlet to students. At the moment, there are no plans to do it, either. The right wing websites are just trying to stir up resentment against groups that dare challenge Christian superiority.

October 27, 2014
Malaysian Muslims Wring Hands Over Day of Touching Furry Friends, Wondering If It's an Insult to Islam
Next Post

October 27, 2014 Friendly Atheist Podcast Episode 26: Steve Wells, Author of the Skeptics Annotated Bible and Strange Flesh
Browse Our Archives
What Are Your Thoughts?leave a comment