Earlier this month, the Ketchikan Gateway Borough Assembly in Alaska decided to approve an ordinance allowing invocation prayers at their meetings (though it still needed to survive a final vote). While that’s happened all over the country, what made this ordinance stand out was that the prayers would be coordinated by the Ketchikan Ministerial Association (a Christian group) and they would be asked to reach out to local clergy, shutting out most non-Christian groups and almost certainly excluding non-religious ones.

Assembly member Glen Thompson (below) said most of those other groups would be welcome. Most. 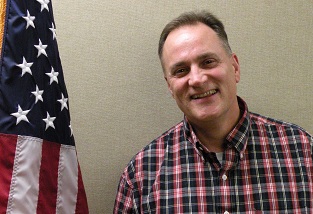 “I don’t have a problem with having an inclusive denominations, be they Hindu, Islam, Bahai faith, Christian, what have you. I will draw the line on Satanists or atheists.”

He later retracted that statement.

In any case, it all caused a big uproar, and I’m happy to say the Borough rejected the ordinance altogether, maybe because so many of you wrote to Assembly members to complain:

Becky King said that just because prayer is traditional, or that other legislative bodies are praying or have prayed in the past, doesn’t mean the Ketchikan Assembly should make it part of the agenda.

“Giving it an official place on the agenda makes me feel that if I don’t pray, and do not participate, you will not give my opinions the same weight as someone who does,” she said. “I will not be voting for anyone who supports this proposal. You are here to unite the community, not needlessly divide it.”

The vote still leaves open the possibility of religious citizens praying during public comment portions of meetings, an opportunity they’ll inevitably abuse, but it’s a different problem than government officials endorsing prayers at the beginning of each meeting. Satanists and Muslims are free to pray during the public comments, too, if they really want to make the Christians uncomfortable… which could be entertaining in and of itself.

October 27, 2014
After FFRF Calls Him Out, Delaware High School Football Coach Remains on the Sideline During Team's Postgame Prayer
Next Post

October 27, 2014 Malaysian Muslims Wring Hands Over Day of Touching Furry Friends, Wondering If It's an Insult to Islam
Browse Our Archives
What Are Your Thoughts?leave a comment