Earlier this year, the Center For Inquiry won a lawsuit against the state of Indiana, giving non-religious people who were Secular Celebrants the ability to officiate weddings. 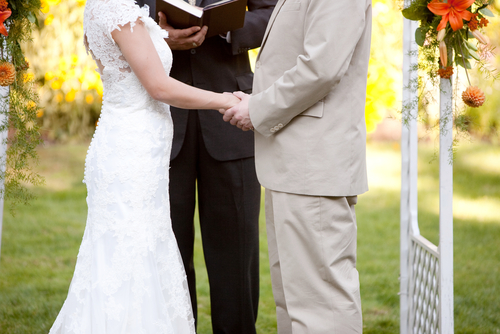 Before they stepped in, the only way an atheist could officiate was to direct the marrying couple to someone else to solemnize the wedding immediately afterwards become a “minister” via a site like the Universal Life Church, or get certified by a group founded by Quakers.

So the legal victory was a welcome one. Atheists in Indiana no longer had to abdicate the solemnizing responsibility to someone else or pretend to have faith.

Now, atheists in Minnesota are trying to do the same thing.

A group called Atheists for Human Rights filed a lawsuit recently against Washington County officials for denying one of their members the chance to become an officiant:

The lawsuit stems from an incident in April where a member of the atheist group was issued credential to perform marriages by the group, which the plaintiffs say was accepted in Hennepin, Anoka and Stearns counties. When the member sought to receive official certification from Washington County, the application was initially accepted. But three days later, Taxpayer Services Division manager Steven Gransee wrote the applicant to tell them that “a member of an atheist organization…does not meet the statutory requirement.”

Another member of the group, plaintiff Rodney Rogers, repeated the process in September. The lawsuit says he was told by the clerk on duty that “he could not be issued credentials to solemnize marriages because the clerks had been instructed not to accept applications from any atheist or humanist organizations.”

It really makes no sense to deny atheists the opportunity when you see the kind of religions Washington County has no problem with:

“These included the Universal Life Church and the Church of the Latter Day Dude, a religion of the Big Lebowski,” [AFHR communication director Maria Alena] Castle said. “Many atheists who want to be certified as marriage celebrants do not want to engage in the hypocrisy of pretending they are ministers of phony churches.”

You can get ordained from the Church of the Flying Spaghetti Monster, too.

None of this, obviously, has any effect on the officiants’ job. If atheist cannot officiate a wedding, but an atheist who pays a few bucks to get a cheap certificate from the Church of the Latter Day Dude can… why bother making us jump through that hoop in the first place?

Minnesota lets each county set their own officiating requirements, but there needs to be some rule that prohibits discrimination in this way. That’s what the lawsuit is all about:

The suit, filed in U.S. District Court in Minnesota, asks that a judge declare state law and the county’s policy unconstitutional, and that the court issue a permanent injunction against denying marriage celebrant credentials based on atheist beliefs.

I can’t understand the reason to deny atheists this ability when there’s no reason anyone needs to be religious to do the job properly. It’s time for a judge to step in where county officials have failed.

October 25, 2014 UC Berkeley Students: Bill Maher Is a "Bigot and Racist" Who Shouldn't Give a Commencement Speech
Browse Our Archives
What Are Your Thoughts?leave a comment