Yesterday, Sam Harris sat down with The Young Turks’ Cenk Uygur to discuss their philosophies, disagreements about Islam, and so much more. It’s a three-hour discussion, so it might be worth saving until the weekend. 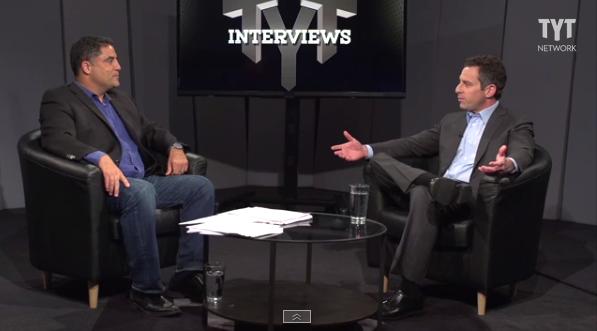 I actually listened to about two hours of the discussion last night and found it really interesting. I didn’t learn anything new about Harris’ beliefs, but I don’t think I was ever guilty of misinterpreting him in the first place. I’ve said before that Harris works best in longer interview formats, and he had plenty of opportunities here to explain himself fully. There were many disagreements, but they handled them with civility. It’s the sort of conversation I wish we could see more of — it’s just *so* much better than talking in sound bites, even despite the length.

If any moments stand out to you, please leave a timestamp/summary in the comments.

October 24, 2014 Would Any Augusta (GA) Readers Like to Go to a Faith-Healing Show... and Tell Us What It Was Like?
Browse Our Archives
What Are Your Thoughts?leave a comment