For a couple of years now, there’s been a Ten Commandments monument outside the Oklahoma Capitol building:

We’ve been talking about it quite a bit on this site for a couple of reasons. 1) It was the subject of a lawsuit by the ACLU of Oklahoma, which said it was unconstitutional and 2) The Satanic Temple made nationwide headlines when they said they wanted to donate a monument of their own to be placed in the same area.

Last we heard, a judge had dismissed the ACLU’s lawsuit (and the Satanist group’s monument was never erected due to a moratorium on additional displays).

Now, the story gets worse. Last night, someone drove a car onto the Capitol lawn and took down the Christian monument: 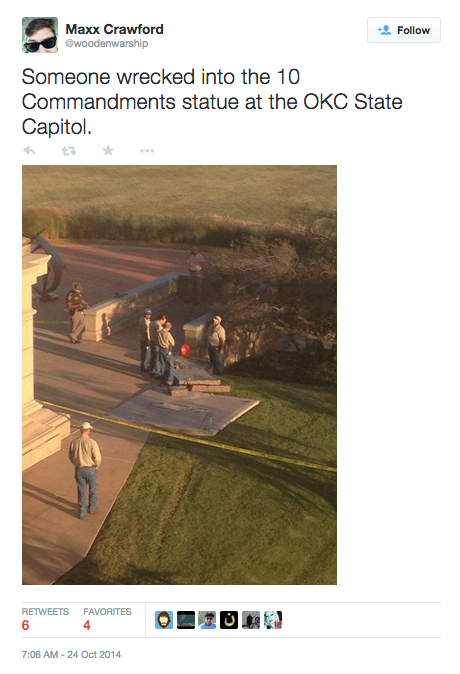 Oklahoma Highway Patrol Capt. George Brown says the person drove into the monument on the statehouse steps Thursday night, abandoned the vehicle and fled. Brown says the vehicle was impounded and authorities are searching it for evidence.

Goddammit. Christians don’t need more reasons to feel persecuted. I hope atheists had nothing to do with this, but I fear the worst. So far, there are no suspects or motives. (***Edit***: There was a typo in this paragraph earlier. Sorry!)

To see the Ten Commandments desecrated by vandals is highly offensive to them as people of faith. Our Oklahoma and Federal Constitutions seek to create a society in which people of all faiths and those of no faith at all can coexist as equals without fear of repressions from the government or their neighbors. Whether it is politicians using religion as a political tool or vandals desecrating religious symbols, neither are living up to the full promise of our founding documents.

I hope they catch whoever did this. I want that monument gone from the Capitol, but this isn’t the way I wanted to see it go. If anything, it’ll just give state officials more of a motivation to erect another, bigger Christian display.

More updates as they come.

October 24, 2014 "I'm Not a Scientist" Is Not an Excuse to Believe in Nonsense
Browse Our Archives
What Are Your Thoughts?leave a comment