Fox News Host Says Christian Plaques at Two Texas Schools Should Stay Up Because of the “Culture in the South” October 22, 2014 Hemant Mehta 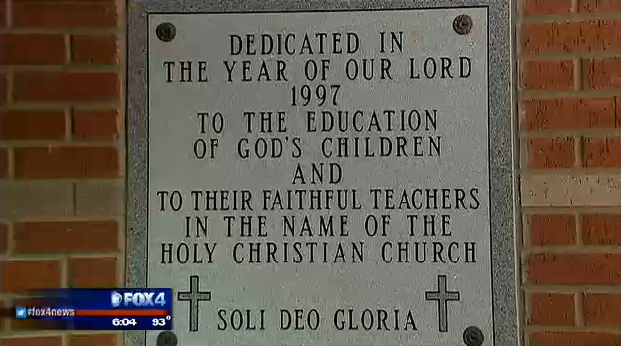 After the Freedom From Religion Foundation sent a letter to district officials, they at least covered the signs up with duct tape while deciding their next steps, though the tape was quickly ripped down.

The school board met a month later and decided they would keep the plaques uncovered for the immediate future. A lawsuit may be forthcoming.

Earlier today, two of the parents fighting to keep the plaques up, Tiffany Davlin and Pastor Justin Coffman, appeared on Fox News Channel to make their case.

Let’s talk about some of the problems in that conversation.

1) It’s just bad strategy to have a pastor front and center as a voice defending the plaques when the only way they’re going to stay up is if a judge is convinced they’re not religious.

It didn’t help that he opened his mouth:

That’s exactly why the plaques need to come down. Public schools aren’t extensions of the church. At least he admits this is all about promoting Jesus. The school board, if sued, will likely claim the opposite.

2) Host Ainsley Earhardt wasn’t any brighter, saying that atheists should back off because Christianity is just part of the culture in the South — Constitution be damned:

“And I think, growing up in the South, people in Wisconsin, these atheists in other cities need to understand the culture in the South, and how church is a very integral part of our childhood and growing up, and it’s a very important part for the Southern culture.”

Of course, no one is denying that. But even if the church is a huge part of the culture for a majority of Texans, that’s no excuse to promote religion through the public school system.

3) Earhardt also claims that this is part of some “War on Christianity” — while at the same time making the case that Christians make up the majority of the South and church culture is so pervasive. She doesn’t see the inherent contradiction in that at all.

And who knew Christian hegemony was going to change just by covering up a couple of elementary school plaques?!

It’s amazing, isn’t it, how these conservatives love the Constitution… until it stops them from pushing their faith on everybody else?

The moment evangelical Christians cease being the majority in any part of the country, you know they’re going to be making the same arguments we use right now. But until then, they’re just happy to stick their fingers in their ears and pretend like they’re the only people whose beliefs matter.

Let’s see how they react the moment a plaque honoring Allah goes up at a local school.

(via Raw Story. Thanks to Brian and Tim for the link. Portions of this article were published earlier.)