Look at that picture. No, that’s not a nasty foot infection. It’s kind of the opposite: a slice of healing red onion. Behold the lowly onion’s amazing natural powers, says Andreea Zoia, a popular fashion model and actress from Dubai. 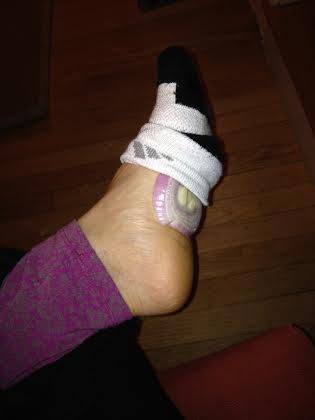 Almost as soon as Ms. Zoia placed the onion on her sole and held it in place with her sock,

I started feeling good. I mean really good! I felt tingly, like my blood was being cleansed. It was so cool!

Placing them on the bottom of the foot gives them access to your internal organs through meridians in your body. The onion can be directly delivered. Trans-dermal delivery (on the skin) is one of the best delivery mechanisms, as it will bypass the stomach acids and go directly into the blood. The bottom of the feet and the forearm are great places to put high powered foods and essential oils into the body.

If you have no onions, never fear:

Sliced garlic on the bottom of the feet will work nicely too.

Repeating astonishing assertions made by others — claims I’ve lately seen circulating on social media again — Zoia is kind enough to explain onions’ healing properties, an effort for which she received almost a quarter of a million “likes” on Facebook, as well as 772,000 “shares”:

Onions are known to absorb toxins. In fact, during the days of the Plague in England, folks would keep chopped onions around to absorb toxins and clean the air. This helped protect them, against getting the plague.

NEVER SAVE AN ONION. It will absorb all the toxins in the air of your refrigerator. Eat that and you eat the toxins. Instead: Chop your left over onion, put it on a plate and keep it in your kitchen as a natural air purifier. I do this all the time! If someone is ill, place a chopped onion on the night stand, next to the bed. They’ll be better in the morning.

Others wholeheartedly agree. With what I imagine was a derisive snort, a skeptical Facebook friend of mine posted the onion-as-a-curative story a few days ago, and a woman called (appropriately) Faith confirmed the account he mocked — as did Matt, another commenter:

Faith: I have been putting cut onion in my disabled son’s room 4 many years in the changes of season’s, ta prevent illness as he is a high risk! And from the time I started doin’ it ? He has not fallen victim ta any flu ! He cannot get the flu. Shot, so I had ta try anything I could and found this bout 7 years ago.

Matt: actually… onion is known to be a sponge for bacteria… some people will cut one open and leave it sitting out in the kitchen to absorb bacteria circulating in the air.. and the feet are one of the areas of the human body which is most often covered and not exposed and allowed to breath.. it is also one of the areas of the body with readily expels toxins held within the blood stream through sweat… “witches” used to use onion in these ways as well.. its really not as far fetched as it may sound.. once an onion is cut open.. it shouldn’t really be saved to be used at a later date.. because the second time consumed it will contain much more than you bargained for…

Matt refers to witches to emphasize that he knows what he’s talking about. Witches, people! How can you not love that?

More importantly, why do those medical fancypants at hospitals all over the world not listen to his sage, witch-based advice?

Maybe it’s because of this, from Dr. Ruth MacDonald, the Chair and Professor of the Department of Food Science & Human Nutrition at Iowa State University:

[O]nions do not absorb bacteria. The idea that a vegetable would attract and suck into itself bacteria from the air is not even logical. The onion may turn black because it would eventually rot from both cell breakdown events and bacterial contamination if you left it out, not because it absorbs germs. Onions and garlic are slightly acidic which could have antibacterial effects if you rubbed the juice on things, but these are much less effective than bleach or chemical antibiotics.

Or because of this, from the Wall Street Journal:

Biologists say it’s highly implausible that onions could attract flu virus as a bug zapper traps flies. Viruses require a living host to replicate and can’t propel themselves out of a body and across a room.

Or because of this, from Hoax-Slayer:

[T]he suggestion that onion strapped to your feet can, in some miraculous and uncanny way, make connections to your internal organs, draw out and absorb toxins and bacteria thereby “cleaning” your blood, and cure your illnesses simply defies logic and common sense. Perhaps, if a person really believes that the remedy will work, the placebo effect may kick in and the person may feel some imagined benefit. But other than that, the health benefits of putting onion on your feet are precisely zero.

If only there was some folk remedy that effectively countered the spreading miasma of utter malarkey.

October 19, 2014 The "World's Most Dangerous Church"? If You Go There, You're Guaranteed to Get High
Browse Our Archives
What Are Your Thoughts?leave a comment