Religious References on Georgia High School’s New Monument Will Be Covered Up or Removed, Says School Board October 15, 2014 Hemant Mehta

Religious References on Georgia High School’s New Monument Will Be Covered Up or Removed, Says School Board

Last month, I posted about a Christian monument in front of the newly-renovated Madison County High School in Danielsville, Georgia: 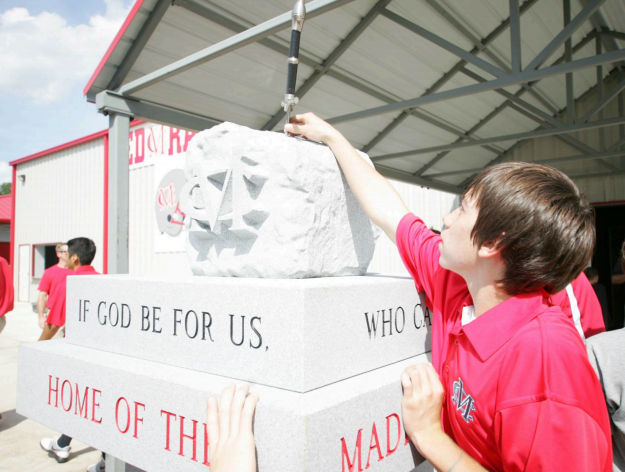 In particular, the sculpture, placed at the Madison High School football stadium, contains the words, “Romans 8:31,” and then directly quotes that biblical passage in large text: “IF GOD BE FOR US, WHO CAN BE AGAINST US?” The Madison High School logo is prominently featured throughout the monument, as well as the words: “HOME OF THE MADISON COUNTY RED RAIDERS.” At the base of the sculpture is a reference to the biblical passage from Philippians 4:13 (“I can do all things through Christ who strengthens me”), bearing the following words: “I CAN DO ALL THINGS” “STRENGTHEN ME.” The sculpture itself is inscribed with the words: “PHILIPPIANS 4:13.” Since it has been erected, the Madison High School football team has started a tradition of touching the sculpture before home games.

Both the American Humanist Association’s Appignani Humanist Legal Center and the Freedom From Religion Foundation had sent the district letters explaining the constitutional problems and why the monument had to go.

Finally, last night, the school board held a meeting to decide the fate of the monument. The citizens knew exactly what needed to happen:

“We are not here as haters, we are here to love all,” [Theresa Gordon] said. “It seems as if these (atheist) groups are here as haters, willing to spend millions to remove God from (our society), which means they are antichrists by definition — they must have hatred in their hearts to fight so hard to remove Him from this small object that was placed for others to enjoy.”

Anna Martin said she supported the monument and that she disagreed that the scripture on it violates the First Amendment. She said people have been brainwashed to believe that the amendment provides a “wall of separation” between church and state.

“We do not have to bend or bow to the demands of these groups,” she said.

Her husband, Jess Martin, spoke last, saying that in this instance, turning the other cheek was the wrong thing to do.

“We cannot let them take advantage of our rights as a Christian nation,” he said. “This is the South, the Bible belt of the world.”

Lots of local ignorance on display. (And who knew atheists had millions of dollars to spend on cases like this?! News to me.) None of these people care about the students, since they’re perfectly fine throwing money away defending this monument, and they sure as hell don’t give a damn about the law. All they care about is advancing their faith in any way possible.

Yet, somehow, the school board wisely and unanimously decided to remove or cover up the religious references. Maybe they saw the writing on the wall, knowing the monument was illegal, and knew they would never be able to get away with it.

And the reaction was pretty much what you’d expect:

As soon as the announcement was made, there was a mass exodus of the 150 — 200 people who had showed up for the meeting, most in favor of the monument. Many mumbled and shook their heads as they left the high school cafeteria where the meeting had been relocated to accommodate the expected large crowd.

Anyone want to bet these people never show up to a school board meeting when budget cuts are being made, teachers are let go, and extracurricular activities are being jettisoned?

Good for the school board for doing the right thing, even if it took them this long to figure out the obvious.