The Stinger is an Air Force-funded publication for members of the 180th Fighter Wing in the Ohio Air National Guard.

Which is why this essay by Colonel Florencio Marquinez of the Fighter Wing’s Medical Group about how important Jesus is to him seemed extremely out of place in the September issue (since revised): 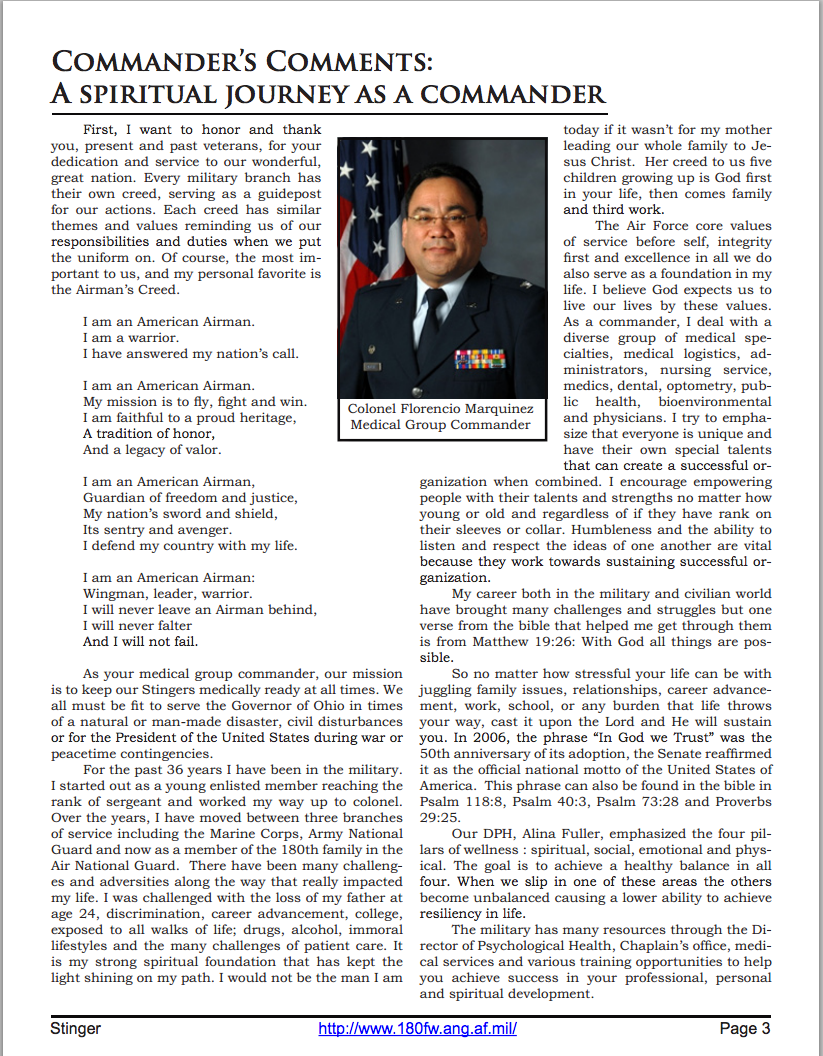 There have been many challenges and adversities along the way that really impacted my life… It is my strong spiritual foundation that has kept the light shining on my path. I would not be the man I am today if isn’t wasn’t for my mother leading our whole family to Jesus Christ. Her creed to us five children growing up is God first in your life, then comes family and third work.

… no matter how stressful your life can be with juggling family issues, relationships, career advancement, work, school, or any burden that life throws your way, cast it upon the Lord and He will sustain you.

On the surface, it doesn’t sound like he’s proselytizing or saying everyone else needs to agree with him. The problem is that he’s definitely promoting his faith, not as a private citizen, but as a military leader using his title, uniform, and publication space. (There’s also the issue of how the Medical Group Commander thinks Christianity, or “spirituality,” is a requirement for wellness, which makes you wonder what he thinks about atheists.)

That goes directly against Section 2.11 of the Air Force Standards:

2.11. Government Neutrality Regarding Religion. Leaders at all levels must balance constitutional protections for an individual’s free exercise of religion or other personal beliefs and the constitutional prohibition against governmental establishment of religion. For example, they must avoid the actual or apparent use of their position to promote their personal religious beliefs to their subordinates or to extend preferential treatment for any religion. Commanders or supervisors who engage in such behavior may cause members to doubt their impartiality and objectivity. The potential result is a degradation of the unit’s morale, good order, and discipline. Airmen, especially commanders and supervisors, must ensure that in exercising their right of religious free expression, they do not degrade morale, good order, and discipline in the Air Force or degrade the trust and confidence that the public has in the United States Air Force.

When the Military Religious Freedom Foundation‘s Mikey Weinstein contacted Commander Col. Craig R. Baker at the request of “several” members — including Christians — Baker agreed to reissue the publication without the column, adding, “I intend to give further academics to all my CC’s to insure [sic] this mistake does not happen again.”

As you might imagine, the Christian Right is flipping out.

[Alliance Defending Freedom] Legal Counsel Joseph La Rue wrote in a report on the matter on Friday that he believes Baker’s actions run counter to the Constitution because they amount to censorship.

“Common sense tells us that it would be wrong, of course, for Col. Marquinez to order those under his command to attend church, or to follow Jesus. But that’s not what he did,” La Rue continued. “No: he merely said, Jesus has helped me, and if you have problems, you should consider letting Him help you, too. There’s nothing wrong or improper about that.”

Note the contradiction there. La Rue makes clear it would be wrong if Marquinez ordered people to follow his faith… then points out that Marquinez did exactly that by openly making his religious preference known. Even though it’s hard for La Rue to put himself in non-Christian shoes, who knows how many people under Marquinez’s command will now hide their personal beliefs or lie about them so that they don’t rub him the wrong way, lest it hurt their chance at a promotion. You always want to make your bosses happy, and if one of them says Christianity is golden, there’s certainly pressure to conform.

Baker understood this, and that’s why he reissued the publication without the column. This essay belongs in a church newsletter, not a government-funded publication.

I asked Weinstein what he thought about Baker and his quick action and he only had effusive praise for the man:

“This is one of the finest military leaders I’ve seen. I wish we had more like him. He did absolutely the right thing. He deserves to be commended for doing his job.”

Weinstein also told me this decision would never have been questioned by the Religious Right if Marquinez was promoting Islam or atheism instead of Christianity. He said, “It’s not a small thing. It strikes to the very core of who you are as a human being.”

October 15, 2014 African Factions of Muslims and Christians Commit Horrific Atrocities; Father Bernard Tries To Stanch the Violence
Browse Our Archives
What Are Your Thoughts?leave a comment