The Benefit of Long-Form Conversations

Last night, Sam Harris appeared on CNN to talk about his criticism of Islam with anchor Don Lemon: 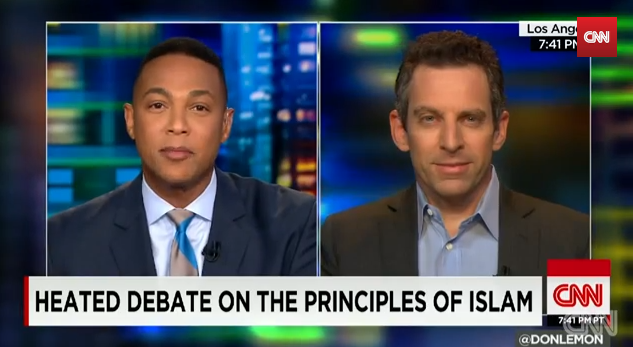 It comes several days after an even longer interview with MSNBC’s Lawrence O’Donnell in which he made some of the same points:

I wanted to set aside the substance for a moment to make a simple point:

In both cases, Harris was given the chance to make his case (or defend himself against accusations) and I thought it made for a much better conversation.

It’s easy to vilify someone for a comment made during a heated argument when everyone has to work in short phrases and sound bites. You’re so eager to say anything that you end up saying something you later regret and that distracts from your larger point. Having done those kinds of interviews before (including on Fox News Channel), I do my best to prepare in advance, to make sure that I have short to-the-point statements ready to go in case the host keeps cutting me off. But those conversations rarely go according to plan no matter how much you prepare.

The same thing happens on Twitter, where brief comments made in haste (or without editorial oversight) are ripe for critics to interpret in the worst possible way. And it’s not like they’re always wrong. When you have to condense complex ideas into a single sentence, a lot of the meaning will get lost along the way.

I’m much more likely to listen to critiques of Harris or Richard Dawkins or anyone else when people are criticizing positions they actually hold. And not every statement they make in the heat of the moment, or on Twitter, or in a brief quotation in someone else’s article represents their views fully or accurately.

Whenever I see a takedown of someone like Harris, even if they’re claiming to quote him, my rule of thumb is this: If I were to ask Harris if he actually holds those views, would he say yes? If the answer is no, then it’s not fair criticism. It’s a straw man.

Sounds obvious, but I’ve seen plenty of awful, untrue things said online about me, friends of mine, acquaintances, and other people I respect. Speaking for myself, people will claim I believe X or Y because of something I said or did, perhaps ignorantly or inadvertently but not maliciously, yet none of those people bother to flat-out ask me if I hold those views. If they did, I would be able to set the record straight. And maybe that’s why they don’t ask — because they’re looking for someone to trash and the truth would ruin their narrative.

Even more importantly, though, if you’re trying to change someone’s mind, misrepresenting his or her views to begin with is the quickest way to shut down the conversation for good. It’s completely ineffective… though it’ll undoubtedly boost the critic’s self-esteem.

In the interviews above, to a large extent, Harris had the chance to make his case in a way he couldn’t on Fox News (where the hosts would never let him speak fully) or even Bill Maher‘s show (where too many people are trying to chime in at once). That’s why I’m a fan of shows hosted by Charlie Rose and Terry Gross and Marc Maron — because they give their guests plenty of time to speak without interruption and you get to learn what they really believe. Their shows are far more interesting than ones where everyone is talking over each other or guests only have a couple of minutes (if that) to make their points.

I also appreciate that those shows aren’t debates, where both sides are trying to one-up the other. The goal is to figure out how the guests think, not to use every opportunity to pick apart why they’re wrong. I see plenty of the latter already; we could use more of the former.

October 14, 2014
The Bill Nye Event at Vanderbilt Was Even Better Than I Expected
Next Post