Meet Physicist Stronzo Bestiale, an Asshole If There (N)ever Was One October 14, 2014 Terry Firma

Meet Physicist Stronzo Bestiale, an Asshole If There (N)ever Was One

Stronzo Bestiale is a researcher at the Institute for Experimental Physics in Vienna who is a co-author on a small number of major scientific papers. His work has appeared in peer-reviewed publications that include the Journal of Statistical Physics and The Journal of Chemical Physics.

He’s also a figment of someone’s imagination, which becomes evident when you learn that Stronzo Bestiale, in Italian, means Total Turd, Asshole Beast, or Complete Asshole, depending on whom you ask.

The man who breathed life into this Asshole (sorry for that image) is a retired scientist, William G. Hoover, who was formerly employed at Lawrence Livermore National Laboratory. A writer named Vito Tartamella (whose name, I sincerely hope, doesn’t mean “Blithering Buttwipe”) finally noticed how unlikely the Stronzo name is and got in touch with Hoover to ask about it. 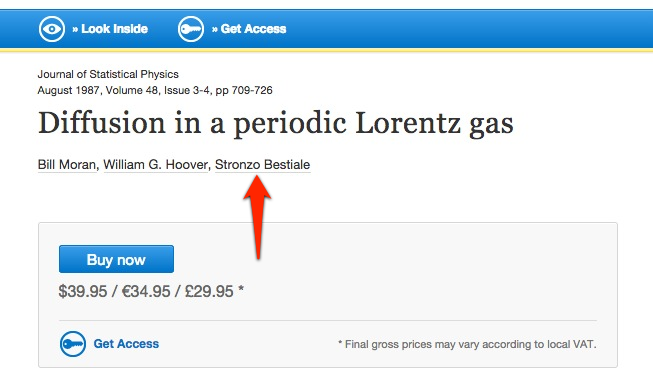 Hoover gamely explained that back in the eighties, he occasionally had a hard time getting his research papers published. That was regrettable but not unusual, he said:

New discoveries in science are hard to publish because scientists are rather conservative, as discussed by the epistemologist Thomas Kuhn.

After a couple of rejections, this happened:

While I was traveling on a flight to Paris, next to me were two Italian women who spoke among themselves, saying continually: “Che stronzo (what an asshole)!”, “Stronzo bestiale (total asshole).” Those phrases had stuck in my mind. So … I asked my colleague [Giovanni] Ciccotti [a condensed-matter physicist in Rome] what they meant. When he explained it to me, I thought that Stronzo Bestiale would have been the perfect co-author for a refused publication. So I decided to submit my papers again, simply by changing the title and adding the name of that author.

Somehow, Hoover concluded contentedly, that made a difference, and the papers were accepted for publication.

Tartamella clearly enjoyed learning of — and writing down — that story, but he issues a sincere word of caution, too. The Bestiale episode, he says

… laid bare how vulnerable control systems in the review of scientific research were (and still are!). If you’re able to insert the name of a nonexistent author in a publication, who will guarantee that even the scientific contents have been examined with care?

I confess I got a chuckle out of the whole thing, but in the cold light of day I don’t believe that Hoover did anyone any favors with his little joke. Making stuff up is not compatible with the ethos of science; and next to a murder trial or a presidential eulogy, a scientific paper is probably the one platform where scatological levity and juvenile guffawing ought to be avoided.

October 14, 2014
Two Republican Congressional Candidates Agreed to Meet with Our Atheist Group, but One Was Invisible and Inaudible
Next Post

October 14, 2014 Another Georgia County Approves Display of "Historically Significant Documents"... Including the Ten Commandments
Browse Our Archives
What Are Your Thoughts?leave a comment