The Dishonesty of Some of Sam Harris’ Foes (Who Clearly Know Better But Smear Him Anyway) October 13, 2014 Terry Firma

Yesterday morning, this is what Sam Harris woke up to:

Some person who goes by the name of @dan_verg_ on Twitter took the most easily misunderstood sentence in The End of Faith out of (its absolutely essential) context, attached it to a scary picture of me, and declared me a “genocidal fascist maniac.” Then Reza Aslan retweeted it. An hour later, Glenn Greenwald retweeted it again.

Here, in its original form, is the quote that was so eagerly disseminated:

“Some propositions are so dangerous that it may even be ethical to kill people for believing them.” 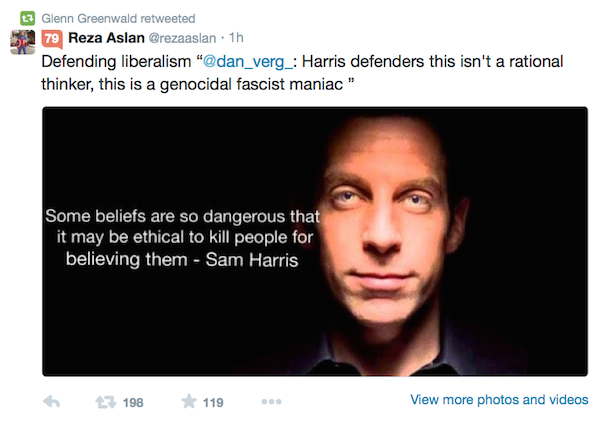 Now read it in context:

The power that belief has over our emotional lives appears to be total. For every emotion that you are capable of feeling, there is surely a belief that could invoke it in a matter of moments. Consider the following proposition:

Your daughter is being slowly tortured in an English jail.

What is it that stands between you and the absolute panic that such a proposition would loose in the mind and body of a person who believed it? Perhaps you do not have a daughter, or you know her to be safely at home, or you believe that English jailors are renowned for their congeniality. Whatever the reason, the door to belief has not yet swung upon its hinges.

The link between belief and behavior raises the stakes considerably. Some propositions are so dangerous that it may even be ethical to kill people for believing them. This may seem an extraordinary claim, but it merely enunciates an ordinary fact about the world in which we live. Certain beliefs place their adherents beyond the reach of every peaceful means of persuasion, while inspiring them to commit acts of extraordinary violence against others. There is, in fact, no talking to some people. If they cannot be captured, and they often cannot, otherwise tolerant people may be justified in killing them in self-defense. This is what the United States attempted in Afghanistan, and it is what we and other Western powers are bound to attempt, at an even greater cost to ourselves and to innocents abroad, elsewhere in the Muslim world. We will continue to spill blood in what is, at bottom, a war of ideas.

For those who still don’t get it, Harris spells it out:

Why would it be ethical to drop a bomb on the leaders of ISIS at this moment? Because of all the harm they’ve caused? No. Killing them will do nothing to alleviate that harm. It would be ethical to kill these men — once again, only if we couldn’t capture them — because of all the death and suffering they intend to cause in the future. Why do they intend this? Because of what they believe about infidels, apostates, women, paradise, prophecy, America, and so forth.

Harris says he’s clarified this very context with Aslan, Greenwald, and other opponents, both live and in written exchanges. The fact that they chose to retweet the scandalous-seeming line anyway, divorced from how Harris used it, points not just to bad faith (ha!), but to a repellent form of dishonesty.

I blame about 10 percent of this nasty debacle on Harris himself, for displaying a certain linguistic carelessness (that was perhaps born of naiveté). In the original passage, he neglected to anticipate and parry the obvious attempts his enemies would make to smear him. He didn’t foresee, as a good editor or a friend might have, that defamers would yank that line from its context and triumphantly plaster it all over the Internet. Mostly for that reason, I don’t think it’s a brilliant bit of writing.

But the real villains here are Aslan and Greenwald. Says Harris,

Given the amount of correspondence we’ve had on these topics, and given that I have repeatedly bored audiences by clarifying that statement (in response to this kind of treatment), the chance that either writer thinks he is exposing the truth about my views — or that I’m really a “genocidal fascist maniac” — is zero. Aslan and Greenwald — a famous “scholar” and a famous “journalist” — are engaged in a campaign of pure defamation. They are consciously misleading their readers and increasing my security concerns in the process.

Greenwald’s behavior is especially disappointing. I’ve loved him dearly for many years, especially after he showed that he is a principled opponent of U.S. military excess; unlike much of the American left, Greenwald bit back just as hard against domestic spying and foreign adventurism under Obama as he did under Bush. That took guts, or at least a steady, non-partisan hand. He also played (and plays) a marvelous role, as far as I’m concerned, in shining a light on the secret government documents purloined by whistle-blower Edward Snowden, one of my heroes.

I wasn’t expecting (much) better from Aslan, I guess, but the way Greenwald knowingly misrepresents Sam Harris reminds me of the low, squalid shenanigans pulled by the Bill O’Reillys and Sean Hannitys of this world. Greenwald’s reckless, lazy retweet, and his overall shoddy treatment of Harris, are stains on the reputation for fairness that the otherwise admirable journalist has worked so long to establish.